In the past few months I have realized I am no Republican. For people not as involved in politics or loyal to the GOP this might come as a surprise because the Republican Party has put on this disguise that it is for traditional people. From what I’ve seen, it has not been that way in a long time. George H.W. Bush accomplished very little socially as president while Bill Clinton passed federal firearm bans, easy access to birth control for Public School students, and expanded the police force. George W. Bush came in and was suppose to be our savior, at least from my understanding. He was suppose to bring back freedom, traditional values and limited government. However what did George W. Bush do? As a Republican, Bush militarized our airports, passed federal spying on citizens (which turned out to be illegal), and expanded nearly every federal agency. Not to mention how we continue to use his actions to fight wars without the consent of Congress (Article I, Section 8, Clause 11 is the only time the Constitution gives the power to declare war and that power is granted to the U.S. Congress). I could have at least ignored some of this because of the panic caused by 9/11, but even then what did George W. Bush do about abortion, marriage, education and firearms? When we obviously saw Democrats pushing against our culture and values you would think that Bush would have pushed back. I saw this country go from patriotic to self-hate within months simply because Bush hadn’t set up a good enough defense for social conservatism, which allowed Barack Obama to come in and change everything. Sadly I can’t defend the Republican Party even historically because even at its founding Abraham Lincoln fought the Civil War while censoring media, suspending Habeas Corpus and fighting the war without a declaration of war. This is not Constitutional, and considering our past two Republican presidents and past three nominees were not socially conservative enough to even vaguely dent what Democrats have done, there is nothing connecting me to the Republican Party other than the fact likeminded people have been tricked into joining it.

What I like to see is when a president tries to pass something the legal way instead of the easy way. When I learned that JFK was originally asked to pass the Civil Rights Act through executive order, but he instead went to Congress, I respected him for that. With our current presidents, whether I disagree or agree with them, I have trouble respecting them or even finding an ounce of sympathy towards our Constitution inside of them. The party of Reagan was long gone after the years of Bill Clinton. Democrats tired of socialism became Republican, but didn’t adopt all of conservatism. This brought rise to a Republican Party that is split into thirds, neoconservatives, moderates, and paleoconservatives. Why haven’t we seen someone like Ronald Reagan win in so long even though that’s what everyone wants? Because neoconservatives and moderates make up the majority of the GOP, and although neoconservatives say they’ll vote for the nominee no matter the costs, paleoconservatives generally wont. Paleoconservatives are more socially and fiscally conservative which our past three nominees haven’t been either. Why should I continue to be a bullied minority in the Republican Party unless they start nominating people I feel proud of voting for? “Vote for this guy or you’re siding with the enemy!” How? I thought the point of all this was to defend and uphold the Constitution. Based on their policies, both candidates swear to overthrow it.

Don’t get me wrong I’m no Democrat. However I’m starting to have trouble telling the difference between which party is worse. As a constitutionalist I believe in following the Constitution and the religious virtues that make up its foundation. Each major party for two and a half decades have been saying they’ll bring better change, but I do not want change, I want restoration. These new policies simply expand the federal government whether it is to defend us from terrorists or save us from our own stupidity. So when I have to choose between two parties against the one thing I care about, excuse me for not rushing to getting behind the candidate you think I should vote for. Voting for a 3rd Party or Independent, even if they lose, still isn’t a waste no matter how many loyalists claim, “if you aren’t for us, you’re voting for the enemy… oh and by the way I don’t like both our options either.” Don’t you see that the reason we’re stuck with choices that the majority of every state is unfavorable of is because of this blind loyalty to the two party system? And if someone decided they didn’t want to choose between “which one is less evil, Stalin or Hitler?” Doesn’t that mean their vote belongs to no one? Many voters do not promised their vote to any candidate, therefore it is not betrayal if they decide to vote for someone else. The point of freedom is that we don’t have to choose between the worst of the worst. For us to be stuck with a nationalist and a socialist it is simply because people are too loyal to the big, rich, largely fake, political machines, instead of God. If you think Trump or Hillary is somehow the best candidate, vote for one of them, vote who you want to vote for. Just don’t tell people who know nothing about politics to vote, and don’t tell people who are tired of the system to continue to vote for everlasting slavery. 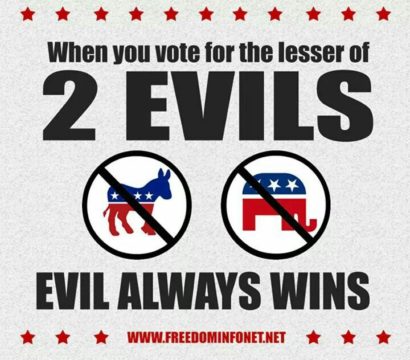 Lastly with the idea of “lesser of two evils”. Yes Donald Trump might be slightly better than Hillary Clinton when it comes to independence from foreign unions and economics, but mostly everything he says is very subjective. For arguments sake let’s say he has finally decided to stop changing his position on policies and everything he says is true. Donald Trump still ignores federal regulations set by the Constitution, and largely does not promote religious virtues. Maybe as president he’ll turn around, maybe he’ll act presidential and religious once in office, but that is a big leap of faith from what we’ve seen so far. Although it would take an even bigger leap of faith to think Hillary Clinton will be any different than the traitor she’s been for the past three decades. Surely Trump is slightly better than Clinton from a value perspective, so if this was a two way race I’d vote for Trump. But at this point it is not. We have five popular political parties battling it out right now, and the debates are still a month away. I’d say that until all hope is lost in the possibility of a three, four, or even five way race, and God tells me he can work through Trump better than Hillary, I’m not going to vote for either of them. So yes there is a possibility I’d vote for Trump if this was a two way race and if God lead me to believe He would want me to vote for him. Until then I can truly say that voting for the candidate you like is way more relieving than voting for someone you know will hurt this country. If Trump or Hillary win it isn’t my fault, and I’ll still be here defending the Constitution from them without regret.