(I’m sorry this article has become somewhat lengthy. I’ll try to keep it shorter next time.) 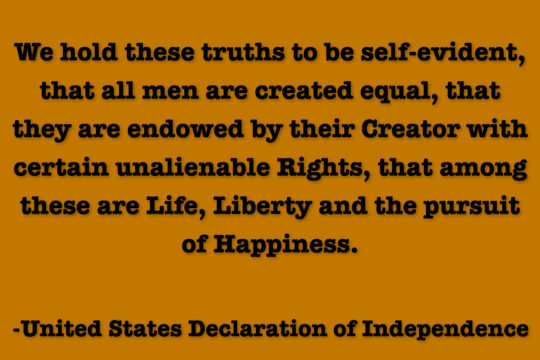 Freedom From Religion. Yes we’re going there today. The Freedom From Religion Foundation is a non-profit organization that supposably exists to defend “non-theists” when the separation of church and state is violated. Now I am not against this idea on that very basic level, everyone has the right to believe or not believe how they choose. As a Christian I believe that religion actually flourishes when people are free to choose what they wish to follow. However, that’s about as far as I can get with relating to this organization.

Freedom From Religion is behind that wonderful “progress” of banning our nations motto, nativity scenes, and prayer from public events. They claim this is because people exorcising their religion in public is a form of “forcing” their beliefs on others. It’s kinda like when anti-gunners claim Fox News causes terrorism for simply offering another worldview that isn’t pro-gun-control. We are treated like we should be braindead since day one, therefore if anyone, even your family, wants to tell you something that “free-thinkers” don’t want you to hear, your as good as being held at gunpoint to convert.

Taking a pause on the legitimacy of their argument, let’s take a look at simply one paragraph on their website. “About FFRF”

Welcome to the Freedom from Religion Foundation

The history of Western civilization shows us that most social and moral progress has been brought about by persons free from religion. In modern times the first to speak out for prison reform, for humane treatment of the mentally ill, for abolition of capital punishment, for women’s right to vote, for death with dignity for the terminally ill, and for the right to choose contraception, sterilization and abortion have been freethinkers, just as they were the first to call for an end to slavery. The Foundation works as an umbrella for those who are free from religion and are committed to the cherished principle of separation of state and church.

(On there front page they do not define free-thought as freedom to express ones religious beliefs without worry of government persecution. No, they compare free-thought to “atheism, agnosticism, skepticism”).

First, how can you claim such moral progress has been made when being free of God is literal anarchy until you make up your own moral standard. Originally we taught Biblical morals in schools, and sworn in on the Bible, not as tradition and not to suppress “free-thought” but because if a moral standard is offered by man and not by God, we have no reason to follow it. A non-theist’s moral standard is not universal (at least I hope that FFRF, Godless Utopia, and Marxists have different standards, otherwise we are all dead!), gives absolutely no reason for life to exist, and therefore no reason for anyone to obey except when held at gunpoint. Karl Marx definitely promoted freedom from religion too y’know. He believed you and I are animals, he promoted equality, throwing off religious oppression, and even affordable healthcare and a whole lot of benefits! However I’d hope FFRF are a little less violent than old Karl was, but I mean, we’ll never know until non-theists take over and save us from those horrible and oppressive Protestant Churches! Non-theists believe we people weren’t created, and therefore we create our own authority… so how the hell can anyone be morally correct if humans can just make up morals as we “evolve”? Somehow history shows us that being free from religion produces advances in civilization??? Well let’s look at the millions killed by the National Socialists and Communists who were free of religion and how even the cruelest pantheists in history have made some of the greatest technological advances in history- or how it was actually male Christians who made up the majority dead on the battlefield believing they were fighting to end slavery. Even Stonewall Jackson broke Virginian law to teach black kids in church how to read and write, he definitely was no “free thinking atheist, agnostic or skeptic” he was a Presbyterian. (Also how come I’ve never heard an atheist mention how there’s more slaves in the world today than there has ever been in the history of mankind. You’d think our moral superiors would bring up human trafficking more than that crazy Conservative Senator from Kentucky). Or that deeply religious black man who was basically the leader of the civil rights movement… now what was his name?… OH YA! Martin Luther King Jr.

So if the atheistic Soviet Union could put a satellite into space, and the self proclaimed God trusting, guns-in-schools, capitalist capital of the world put a man on the moon… I doubt free-thought actually has much to do with non-theism and more to do with freedom of expression.

Anyways let’s also look pass the fact they think waterboarding is inhuman but suicide and ripping a baby apart limb by limb in a dismemberment abortion is morally sound, and move onto their constitutional credibility.

If you listen too much to Bernie Sanders, you might be unaware that our Constitution has these things called amendments. The 1st Amendment is the one we’ll be focusing on today, it is pretty straight forward to us not blinded by the anti-theist agenda in the public school system.

(Oh, and before someone in here starts emailing me that me trying to read amendments literally is only my truth and therefor I can’t tell you that your truth is wrong. Please research the 9th Amendment and our Declaration of Independence. If you’re a postmodernist, why are you even here? After all my truth and your truth are just as good apparently. Why read anything by anyone? Just come up with random stuff- if you believe it’s true, it must be true!)

“Congress shall make no law respecting an establishment of religion, or prohibiting the free exercise thereof; or abridging the freedom of speech, or of press; or the right of the people peaceably to assemble, and petition the government for redress of grievances.”

We have this amendment here because our founders saw that when the church governs the state, religion can be used by people in power to justify anything, especially if they control what parts of religious text you hear most often. I’m fully willing to admit people have done horrible things justified by blind faith in church leaders or willing to create anything to promote their own agenda. However that does not discredit the other three-fourths of this amendment. The next part specifically states that prohibiting the free exercise of a religion is just as unconstitutional as enforcing a religion. So if a Christian is told not to pray, would that not be a violation of his right to freely exorcise his religion? If members in a city council or police department or football team or small town want to exorcise their religion, is it not persecution to say “no you can’t” simply because you’re offended at the sight of it? No one is forcing you to pray, no one is forcing you to be baptized, no one is forcing you to go on Christmas carols that include actual Christ-centered Christmas songs. Telling us we can’t exorcise our religion because your offended, now that’s an infringement on the 1st Amendment. Any person should be free to exorcise their religion, wherever and whenever they want. Whether it offends Christians, Muslims, Jews, Hindus, deists, skeptics/agnostics or atheists. We all have the freedom to exorcise our beliefs as we choose. If the owner of a business wants to fly the Christian flag or Southern Flag or Rainbow Flag or Nazi Flag or Soviet Flag or any other non-state flag that may offend people, they have the right to do so. Therefore we as free people can make the decisions for ourselves to not fly a flag or shop and work at places we feel uncomfortable in. Unless it’s a private school, I should be aloud to wear a Dixie Outfitters’ t-shirt to school, and your kid can wear all the socialist Karl Marx and God’s Dead t-shirts he wants. Let freedom ring and bigotry will simply die off by instilling good morals in the people instead of weaponizing the government against the 1st Amendment every other day.

Lastly, according to the Freedom From Religion Foundation, non-theism has a moral standard; and not just a good moral standard, but a moral standard that creates better progress than religion. How is it that our Public Schools then are suppose to be completely bias to non-theism when raising a majority of religious people. If teaching anything related to Christianity is such a heavy burden on the 20% religious unaffiliated, then how is teaching outdated lessons on evolution not a burden on the 80% connected to a religion that believes in a creator? I’d think a group of people that hold’s a view of God, and the belief they are morally superior to everyone else, should not have the legal grounds to influence education. FFRF your view of non-theistic freethinking is literally my definition of a religion. You hold a view on God, have a moral standard, and believe your standard is right over the other religions. So if schools can’t even recreate all of A Charlie Brown Christmas because they actually tell the true meaning of Christmas, then y’all really shouldn’t be given whole class periods bias towards your non-theistic religion.

And before you go there, yes, I include all religions under the defence of the 1st Amendment. Everyone has the right to freely exorcise their religion.

My right to worship trumps your completely illogical fear of seeing someone express their religion in public.