(Update: Originally I thought I could at least trust the media to report the names of firearms correctly. Sadly up until 2 days after the shooting no large media outlets reported that the rifle was actually NOT an AR-15 platform. Instead it was a Sig Sauer MCX. To liberal media they might both be “scary black rifles” but the Sig MCX does not share many interchangeable parts with an AR-15.)

In Florida a man by the name of Omar Mateen grew up in an Islamic family. His father has broadcasted an “anti-Afghan” television show where he has spoken with honor about Taliban soldiers. People who knew Omar in high school said he started acting different after 9/11. Years later he became a security guard, but showed closer connections and friendliness towards ISIS members through social media. Throughout his later life Omar seemed to support these extreme acts in response to how much he hated what he saw as wickedness brought on by western society. The United States government started taking interest in him by his sketchy past on the internet. One of his co-workers even reported his behavior to their employer, but for being Muslim Omar was dismissed of any suspicion. According to his father they saw two men kissing on the beach and this is what made Omar snap. Instead of taking a peaceful route he decided to follow the inspiration of ISIS and how they viewed the teachings of the Muslim prophet Muhammad. Omar called 911 declaring allegiance to Abu Bakr al-Baghdadi, an Islamic State leader. At 2am in Orlando Florida he opened fire in a gay nightclub, killing 49 men and women located in the facilities and injuring many more. The semi-automatic rifle and 9mm pistol he used were legally purchased within the past week in Florida. Once Omar was finally killed in a shootout with police the internet went from mourning to quickly pointing fingers. Everyone obviously wants tragedies like this prevented, therefore fight arose over what actually caused the attack. 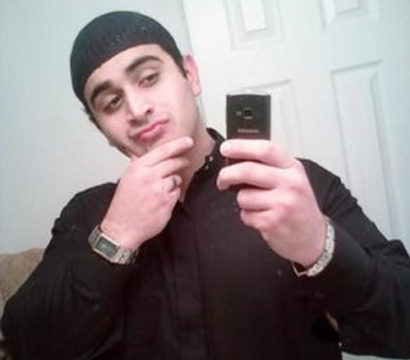 So now that you know what generally happened let me tell you what I’ve been hearing and thinking. Yesterday was filled with liberal media, politicians, and stars telling us this is all a “gun violence” issue; creating trends insulting the NRA, NRA supporters, and Americans who want to own a modern firearm. The liberals would lead you to believe that the answer to this problem would obviously be more gun control, but first I’d like to address something that has really been growing on my nerves.

There’s something this country once had, values. Y’know, like honor and respect and loyalty. Now it seems we’ve made enemies of eachother. In order for a country to remain free the government can’t be baby sitting you, therefore individuals have to take care of eachother. Without values the government has to take further control to make sure we don’t kill ourselves. Sadly government eventually will reflect the fallen state of the country and end up being just as greedy as the people nagging the government for more security. This is what traditional Americans want to avoid, losing freedom and then entrusting their lives to a corrupted government. What doesn’t help is this dishonorable mindset of “my opinion is more important than logic”. When we try to ram forward an agenda the minute a tragedy happens what does that really say about us? Japanese Americans were imprisoned because of fear over Pearl Harbor, our 4th Amendment rights have been taken away for over a decade because of fear over 9/11. Trying to pass a political agenda before anyone has a chance to mourn and properly debate a topic is one of the most dishonorable things both sides of the political spectrum are guilty of. What’s even worse is how a Congressmen or women can create a bill with thousands of pages and a name that sounds like a solution, but gives no one the chance to read the actual contents until it has already passed. We need time to debate things instead of instilling fear into people in order to get an agenda passed that might not help in the slightest.

Now since the media has been so relentless on gun control I once again have to talk politics in a time we really shouldn’t be. At least a day has passed which I suppose is better than not even giving it 10 minutes like some people, but I really hate having to debate social issues while people are being worked on in a hospital.

In response to what the liberal’s “solutions”, what should we do? Should the government start putting the people that are on terrorist watchlists on a “no gun lists” so they can’t purchase a firearm? Should we ban all rifles with a detachable magazine like in California? Who’s fault is it? Well you have a choice. You can either live free or you can die in a police state. But let me give the liberals some advice. Banning firearms will never work in the United States, firearms are connected to our structure and our way of life. There’s a reason why the amount of firearms in the United States has surpassed the amount of people, we trust in ourselves for defense more than the government. So I highly doubt you’ll be able to take all our guns away without a fight. Even if you ban them slowly they’ll be around for a long time on the black market where terrorists (and common criminals) will still buy them. Making gun free zones is literally suicide because you’re basically marking those areas as “defenseless zones”. What could have prevented this very specific attack was if the US government had this suspect on some kind of list that would have prevented him from getting a firearm. However most terrorist watchlists are very generic and can contain thousands of innocent people. If not handled properly this could allow the government to deny the right to bear arms to people they simply don’t like (such as civil rights activists). Also if you believe the criteria to be on a watchlist should be tightened to only allow people who really do seem like an immediate threat, then those people should be immediately arrested. We’ve been told that the people on the “No Fly List” should be denied gun rights, however the reason this isn’t so is because the “No Fly List” is very generic. Instead of denying gun rights to those on the No Fly List, why not notify people they are being watched and put then on house arrest. Then they can’t go buy a gun and if they leave while being investigated police will catch then before they get anywhere.

Now I don’t approve of the government having the authority to put people on house arrest simply for being “suspicious”. Still, this is how I think liberals should approach it if they were logical. If you think someone should be denied a right, they should probably be arrested in some manner. You’d definitely have to promote a more fool-proof scanning process however, since from what I can tell Omar Mateen wasn’t even on a watchlist at the time of the shooting. It’s that, or you could take my more simpler, more libertarian approach. I trust fellow Americans. Once upon a time we could leave our doors unlocked, but now that we’ve been threaten we can either take the liberal approach and entrust the government with our lives, or we can thank God for our guns. As I said earlier, freedom cannot stand without people voluntarily taking up the values that uphold it, one of these values is to defend one another. Not all tragedies can be prevented but they sure can be minimized, and sorry but I can’t think of too many situations where more government intervention minimizes a problem. If you choose freedom you believe every law abiding citizen, including minorities, have a right to defend themselves. If you choose a peaceful slavery (AKA security), this means you believe the government can defend you better than yourself, and your willing to sell them your rights in good faith that they won’t take everything from you once they have complete authority over your life. Your choice, but I just don’t know why you’d live in America if you would rather choose security over freedom.

Lastly, the media has called this tragedy nothing more than a hateful shooting. The worst they’ve called this deliberate attack is “the biggest mass shooting in American history”. Well I’d like to add to that. According to anti-gun groups, a mass shooting is when multiple people are injured because of “gun violence”. So what counts as gun violence? According to liberal media over 30,000 people are killed by gun violence every year in the United States. Big number right? Well except when 9% of them are in Chicago (anti-gun capital of the country) and 60% of all estimated “gun violence” in the United States are suicides. So if multiple people purposely harm themselves with a firearm your telling me that’s a mass shooting? If simply anything involving a gun related injury is “gun violence” then wouldn’t war count as one giant mass shooting? The biggest mass shooting in American then could have been the Battle of Antietam. But this made me realize something. The attacks in San Bernardino and Orlando we called “mass shootings” and Obama called for more gun control. Yet both these attacks were credited to ISIS. That’s like if we were infiltrated by Communist assassins and still blamed it on “gun violence”. Imagine the world’s response if all America did when Paris was attacked was shame them for allowing “gun violence”. The American people were deliberately attacked by a rebellion that has declared war on America and all our president does is blame our gun rights. This is not a gun violence issue Mr. Obama, these shootings were our enemy leading assaults on our soil. We the people are at war with the Islamic State whether you want to admit it or not. ISIS are the ones killing us, not our guns. Thank God Congress at least got that right. As long as we still have our faith and firearms the Islamic State will never win. ISIS and ISIL might think they’re all big and powerful because they’ve got a few cities in the middle of the desert, but if they try to invade a single town in America they’ll soon find an uncountable amount of Americans bearing down on them with their guns locked and loaded. 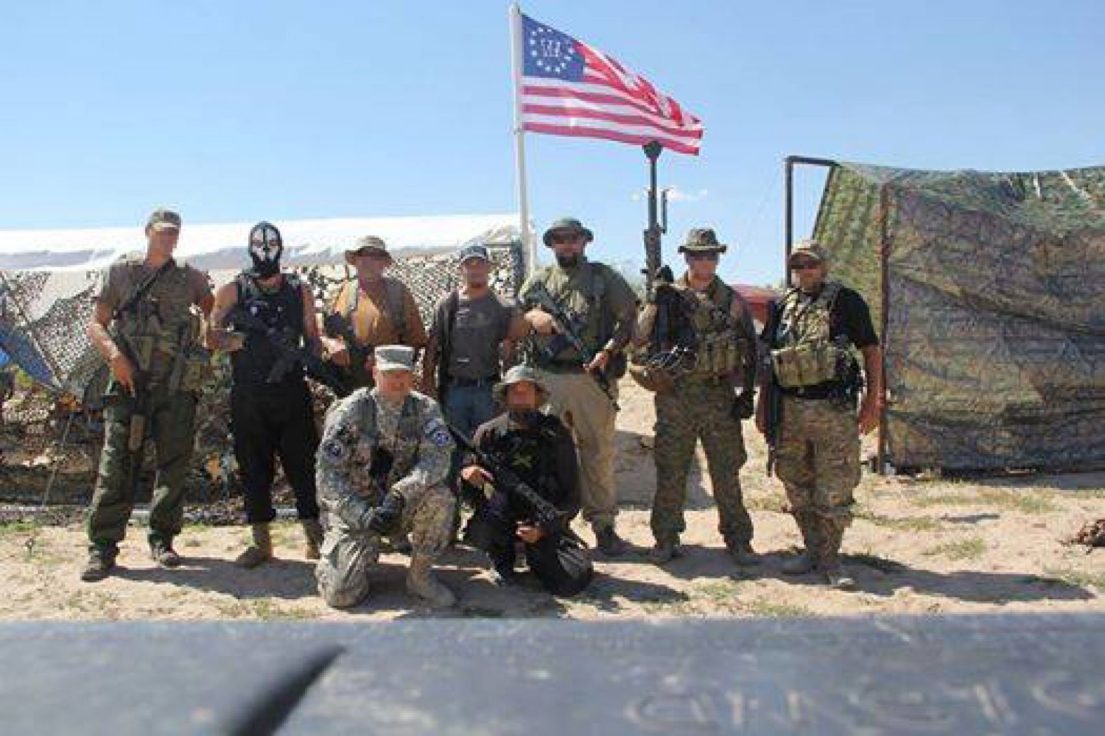 (Three Percenters on guard at the border 2014)