Most people don’t want to admit it, but socially we’re back in the 1960s. This time I believe the causes may have been switched. Where because of discrimination within Black Lives Matter, antifa and the Black Panthers, white nationalism is on the rise. In the 1960s there was a debate on how to combat racism. Martin Luther King Jr. believed in unity and peaceful protest. Malcolm X believed in a revolution where white people must give up their ways to follow black people. As I reminded myself of different aspect of the 1960s I discovered something more sinister. If the majority of either whites or blacks were convinced that being American was only a white-person-thing, this country would collapse. If either the KKK or Black Panthers had won, everyone would have lost. MLK was the exception to this division. He didn’t detest the United States, and he didn’t believe Christianity was a “white mans religion” and Islam was the “black mans religion.” His message wasn’t this divisive. History shows us the MLK’s actions at least impacted our nation socially, while Malcolm X’s legacy has pretty much been ignored up until the formation of Black Lives Matter. 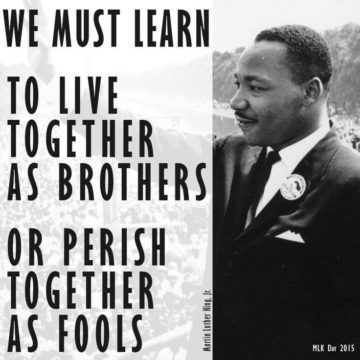 What I’m getting at is African American protests in the 1960s were because the black majority wanted universal brotherhood, not war with white people. Sadly there was many white people who believed black people were unsafe and not capable enough to mix with “white” society. Luckily, while some people attempted to hijack these debates to promote communism or nationalism, Martin Luther King and our nation rejected these voices of division.

Since those days the divide has been reinstated, maybe in the opposite order, but people have forgotten the message of unity, and protest in the name of Nazism and “Anarcho-communism”. Due to our media only focusing on what’s evil in the world, hate was advertised rather than addressed and left to die off. Important situations became politicized, making whites out to be the oppressors, which only made racism against whites more socially acceptable. But because white people did nothing while black hate groups grew, those who wanted to combat the black hate groups joined white hate groups. We’re back to the division of the 1960s, and while I don’t believe the majority of both the black and white populations approve of hatred, the majority of active protestors seem to. Something missing from our parallels between 1960 and 2016 is the middle ground. Our modern middle ground is no longer active like MLK was. When the majority of the country disapproves of something we don’t protest, but the ones who do protest seem to be the least likely to represent our culture.

What this country needs right now is a voice much like Martin Luther King Jr. One that won’t preach hatred or violence, but that we are all brothers and sisters. We must work together and, in modern day, find common ground on issues we’ve disagreed on. It is obvious as Black Lives Matter and the KKK throw rocks at each other that they will not bring about this peace. I have believed that protests could only solve political issues and not social ones, but maybe we can find a way to hijack these protests for a greater good. We need to make art that isn’t spurring on war. We need to protest for what we know is right, and be such a large force that neither the wrongs of antifa or the KKK can overpower our voices. There are some things worth protesting about, and if any racists try to join in we must denounce them on the spot. Siding with one hate group in order to defeat another would be repeating our worst decisions in history.

In order to defeat the Nazis we allied with the Soviet Union and let them conquer Berlin. Anyone who knows anything about Germany between 1949 and 1990 probably can agree that wasn’t the outcome we all wanted. Once allies and Soviet sympathizers, Americans slowly realized that the Soviet Union was just as authoritarian and murderous as Nazi Germany. As long as the argument is between Nazism or Communism no one wins as proven to us in history. If we look at our political state as left or right, and believe that left-wing politics has gone communist and right-wing politics has gone fascist, then where do we go? Well by definition I don’t believe the Republican Party or fascism is right-wing, but that’s an argument for another day. The unity this country seeks won’t be found as a million different ideologies clash on our streets. Socially our only hope is God, and our liberty will not be found in antifa or the alt-right. In this case, as Ronald Reagan said, there is no left or right, only an up or down. Everyone of these ideologies is contrary to our Constitution, our liberty and our God.

Let’s work to understand each other and do good in our own little ways. Getting to know each other personally, logging out of Facebook to check on what our immediate family needs, and going to church together can only help create a more healthy America.