A week or so ago a YouTuber by the name of Logan Paul posted a video where he explored through a Japanese forest known as the “Suicide Forest.” This is because many people tragically hang themselves in this forest. If you don’t know already, Logan Paul found a dead body, hanging from a tree and handled it in probably the most unprofessional and unsympathetic way possible. Most humans would be traumatized, or at the very least call the police instead of filming the situation for YouTube views. What really blew this video up was YouTube allowing it to appear on their trending section. Not only did YouTube not take the video down after it being flag many times, but they continued to ignore it even as it “grew” to trending. To YouTube’s credit, the video could of simply been there because their trending section is usually comprised of creators they favor. So maybe Logan Paul was simply on their radar and they COMPLETELY ignored the content of this video (including the thumbnail and title). Either way a YouTube celebrity showed millions of kids, in a goofy manner, the dead body of a suicide victim. 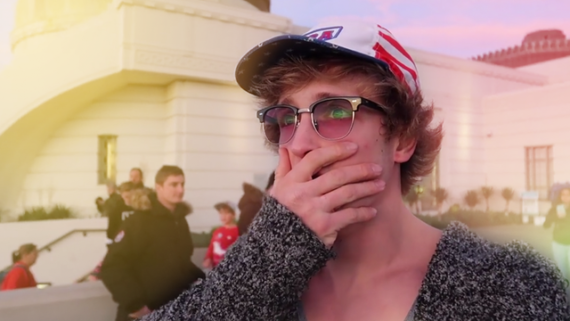 While this is the first graphic thing Logan Paul has gotten in trouble for, he has made a name for himself through annoying everyone around him. It’s a trend I’ve never understood. Back when Call of Duty commentary was popular there were tuns of videos where people would “troll” other players. I hated these videos because all I saw was fighting, confrontation and bullying in video games, which were once a place to escape from those things. But for whatever reason people found driving people nearly insane with rage “funny.” Logan Paul’s videos are very similar, because if you step outside of his bubble and try to sympathize with the people around him you realize he’s only annoying and hurting people for his own gain. He has been so engulfed by this culture that he doesn’t even think when he sees a dead person, he’s just a zombie. Some are emotionless zombies, but in Logan’s case he’s a comedic zombie. That’s all he can focus on, himself and the next punchline. Not a dead person, not his backstory, not his family, just what immediately affects Logan himself.

When playing video games or watching violent movies some people don’t think twice about a background characters death. “Oops, well he died” with no sympathy, usually because we know it’s fake. However some people don’t separate those things. More and more violent things are broadcasted on Television and YouTube, whether it’s from a car crash or overseas war. Where past generations learned of the violence through text, we learn about it by seeing it. I think this greatly desensitizes us to these dramatic events. What was once traumatizing is now shown to millions of people. It’s the destruction of innocents and sympathy.

This is why I always consider myself a child. I believe in innocents. I like toys, I like colorful things, I don’t look at people for their body and I try to give people the benefit of the doubt. I also extremely sympathize with anything. I left a lizard in my house when it was freezing outside. I didn’t want to kill the fly that was in my car. When someone gets hurt I’m sometimes more sad than they are. Hearing that, some of you might question how I’m conservative. I sympathize with a lizard? That sounds like something a hippy would be doing right? Well while I believe God put us over animals I don’t see what’s wrong with helping anything if it doesn’t harm me. Either way, that’s the child I am. Sad thing is, the term “maturity” seems to have corrupted innocence. What do you think of when you hear “immature?” A screaming child at the mall perhaps? Someone who’s self centered; the modern day child. When someone is doing something immature other’s often say, “don’t be a child” but I think this is an insult to children. Kids are only this way when uncorrected and the actions excused as “immaturity.” Little children often have not see any of the evil this world has to offer, and if anything should be an example of innocents for us all to live by (Matthew 18:3/ 1 Timothy 4:12).

Sadly, since we have linked immaturity, greed and even lust with “childish thinking” some of the worst people still consider themselves children. Logan Paul is one of these people, calling himself a 22 year old child on the description of his website. Many YouTubers say this, and it really confuses me. JackSepticEye openly admits to watching porn and thinks it’s fine, yet calls himself a big child. This is because people think immature things are childish, but when in reality teenagers and college students are often more “immature” than children. I don’t really think “mature content” should be viewed by “mature” people if the definition rings true. “Mature content” is only rated mature because it is filled with things that most people would consider “immature.” Real children are innocent and especially not lustful. A real child would run screaming or break down crying when seeing a dead body, not laugh or profit around it. But as we confuse what is and isn’t childish, we show kids things that weren’t even aloud to be filmed in our grandparents age. It desensitizes us to what should be traumatizing and we should pray to never see. We know bad things happen, like I have explained through words to you in this blog post. But we don’t need to view it, and it definitely is not childish to be unsympathetic. Referring to college partiers and people like Logan Paul as children is not just an insult to children, but only embraces the desensitization of our youth and culture.

Note: Logan Paul has apologized for posting the video and has been on hiatus. It’s hard to take many celebrity apologies seriously after some comedians half-heartedly apologize after backlash, and some even take their apologies back. However I want to believe Logan is sincere and I pray over his break he discovers a healthier path in his life for himself and his viewers.