Recently I saw a Tweet that defines liberalism as a whole. Donald Trump had quite a good speech (which is rare from my perspective) at Liberty University. In this speech he reflected on how Americans choose God over government. He went into further detail how our society has always been this way from the Pilgrims to the Declaration of Independence, and how we chose to reflect this in our motto, pledge and currency. I would also like to add “and this be our motto: In God Is Our Trust” being a part of the true ending to our national anthem, even-though media likes to excluded the 4th verse to the Star Spangled Banner. Now after Trump gave this speech applying logic, history and open opposition to tyranny, liberals felt a need to critique him. Sadly this critique was completely unrelated to what Trump was talking about.

On Twitter, Fox News had been quoting and posting videos of Donald Trump’s speech. One of those quotes was, “In America, we don’t worship government. We worship God.” To which the American Civil Liberties Union replied, “Actually, in America, we don’t have to worship God if we don’t want to.” Thus pointing out every problem in social liberalism. That Tweet said it all. They didn’t condemn the government, didn’t supply fact, didn’t even create a counter argument. Instead they stated something that is factual, but is completely unrelated. Donald Trump did not say in America we HAVE to worship God, but liberals look through the world thinking everyone holds the same intentions they do. When a conservative believes we’re a Christian nation he or she does not believe that other beliefs should be illegal. Liberals on the other hand want cosmic humanism or atheism, and therefore will legally prosecute anyone who publicly exorcises religious absolutes. This especial goes for groups like “Goddless Utopia” and “Freedom From Religion Foundation” that use the government to combat religion, yet claim they’re saving all of us from religious oppression. This nation of Christians included the 1st Amendment to protect religious freedom, yet liberals claim it is the Christians who want to outlaw opposing views (which is what the liberals have been doing for years). Their platform has gotten so backwards that it spawned the “Antifa” Movement. 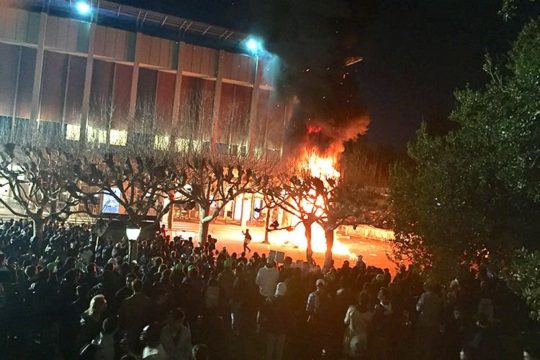 Antifa stands for anti-fascist, however it’s anything but. Antifa uses violence to intimidate “hate speech” or any speech THEY determine is “fascism.” Since they have no concept of history and only believe in what Google tells them, antifa believes Donald Trump and his supporters are fascists. I don’t know what you think, but most fascists were against religion, for bigger government and supported gun control (the exact opposite of Trump). So in reality antifa is an organized group of rioters who burn private property anywhere a conservative tries to have a speech.

The Oath Keepers, who have always defended Constitutional Law, have now taken it upon themselves to defend free speech from antifa, or as they call them “leftyfa.” But how is this all connected? Well while left-wing extremists use violence to demand the government to outlaw free-speech, right-wingers always recognized that all speech must be legal. Bad language and morals can be separate from government ruling. So trusting in God over government might be right, but we all knew from the very beginning it is legal to be an atheist. It’s obvious to everyone. It’s also legal to steal every napkin in a restaurant, but if I said “we don’t steal napkins” it’s 100% unimportant to then argue “uh well actually you CAN steal napkins.” Well yes you CAN do anything and it MAY be legal, but that doesn’t make it RIGHT. See, liberals don’t know a right or wrong separate from government, so their social beliefs will always be demanded of us politically. When we speak about social issues they condemn us as “theocrats” because they don’t understand how we could be against something morally, but not legally. When marijuana is legal, they think it’s right to do. Just because you CAN purchase porn and burn the American flag doesn’t make any of it right. No free society will every last if we all believe “freedom” insinuates “do whatever you want.” Freedom can quickly turn to anarchy if the people do not self-regulate themselves based on religious virtue. If the people are too selfish, too violent and too stupid to take care of themselves then they will justly lose their freedom. However I’ve come to the conclusion the liberal belief of virtues and economics is even more greedy, violent and ignorant than even the most anarchic of capitalist societies.

With liberalism, government controls the economy and defines virtue. Hate is illegal, but so is love of anything contrary to the government.  You can go to jail for racism, or for trying to homeschool your child. If it contradicts furthering the “proletariat” then it’s evil (y’know, kinda like worshiping man instead of God). Their economics are dangerous as well, not just logically but morally. While people say capitalism is greedy, socialism is the true form of greed. Just like the rest of conservatism, capitalism offers a choice. Sure people can be greedy, but people can also grow without the restrictions of authoritarian government. Capitalism required a religious and virtuous people, which is why Americans are naturally charitable at their best. Our country once survived off charity, and with charity you do not need government mandated welfare. Socialism rises off greed itself. People want free things without working for it, and use the government to steal from people who have more than them. It’s the lazy, jealous and ignorant stealing from the rich. How is it justice when a man who’s spent his entire life taking all the risk to run a business is taxed so heavily that all his work gave him income equal to the man who’s done nothing and gotten “free” college, “free” healthcare and “free” housing all at the other man’s expense? Why is it that a charitable capitalist society is always considered more greedy than the country that feels entitled for doing nothing? Sure in capitalism there are rich people, but these rich people give millions of dollars to charity. Socialists acts like it’s immoral and wrong for these people to have more money, but in reality they’re just jealous. Not every upper class person is the supervillan Hollywood makes them out to be. Who cares if people are rich or make more than others? The great thing about capitalism is if you didn’t sit there and complain about the rich you can make more money too! Capitalism gives you options, a diverse market and the freedom to grow without being taxed back into the ghetto. Socialism thrives off hating people you don’t even know, and denies everyone the chance to reach the American Dream. That’s the circle of liberalism. When religious virtues are gone the government can promise the hope of a god. This “hope” obviously requires higher and higher taxes, and while your family stays stuck where they always were, the government grows bigger and bigger. It’s much like an online scam. “Send us all your private information and some money and someday a dead prince will send you his inheritance.” So you keep sending money, and voting to send other people’s money, but very little ever comes your way. It’s the welfare state, it’s socialism, it’s economic and spiritual slavery. And that’s what the Christian-right opposes.

Yes, ACLU, you don’t have to worship God if you don’t want to, but what our president was saying is Americans DO and we do a heck a lot more than our government. Condemning the truth in that statement either means you worship an elected body of politicians, or believe it is immoral for Americans to worship God. Either way it doesn’t really make you a union for “Civil Liberties” now does it?

Government is not the solution to our problems, government is the problem. -Ronald Reagan