Through my whole life people told me I had to go to college. While I did not want to attend college for many reasons (which is an argument for another day) my parents still convinced me to go for a certificate. I’m still planning on keeping my promise to never get a degree, but my short time in “higher” education has taught me a few things. I could go on and on about the moral depravity in college, or how the faculty and content of the classes aren’t even good role models for students, but today I’d like to focus on a constant theme in my business classes. Diversity and Socially Responsible Marketing.

In every class I remember there was the obvious push to fight “climate change” and more references to the “sexual revolution” than I was comfortable with. But at least that was content staying within the college boundaries. What concerned me the most was “Socially Responsible Marketing.” Liberal college professors might argue what I’m about to say is not the intent of Socially Responsible Marketing, but in our class discussions this was exactly what students were taking away from the class. Socially Responsible Marketing is using marketing to influence society for what the marketers believe is the greater good. Such as Starbucks supporting abortions or Chick-fil-A opposing gay marriage. I argued that Socially Responsible Marketing is harmful if the campaign was unrelated to the brand, and when it promotes political activism instead of social awareness. I was opposed to the idea that it is the business’ duty to call upon people to vote a certain way. This got me a lot of opposition since people (including the textbook) continued to argue it is the DUTY of the business to demand of their customers to legally oppose climate change. I argued that if businesses informed people of what they believed was global warming, then why would they have to ask individuate to vote for government involvement? That’s when I got a bunch of mumbo-jumbo from a Bernie Sanders’ supporter who claimed big corporations are the root of all evil so of course government has to dictate how they operate. Which is funny because if corporations are inherently bad then why are we saying these same businesses should promote social activism?

Something that was taught in these classes, in parallel with Socially Responsible Marketing, was diversity. We were repeatedly told a diverse work environment is better… without much more reasoning than that. If a certain ethnic, religious or sexual group was not being employed by a business it is the duty of the employer to seek those people out (otherwise the business is considered an unhealthy and discriminatory work environment). This is why a large majority of textbook illustrations include a black person, white person and an asian person together more often than you’d ever see outside of college. Actually, not a single one of my college’s 2016 promotional photos included a white male… because of course including someone who might look something like the common population of America would be racist. I’m not saying being equal and welcoming everyone is a wrong thing, but when you distort the obvious demographics of a country to look more “diverse”, for the simple fact of looking “diverse”, you cant seriously say this lesson has anything to do with growing a small business. You should hire people who want the job and are capable, not worry about whether you have a 50/50 mix of black and white in your workforce. Especially since African Americans only make up 13% of the population. Plus I think the common human can tell we have differences. I’m not saying there aren’t exceptions, but I also don’t believe it’s bigoted when a construction company finds more male employees and a Macy’s finds more female. 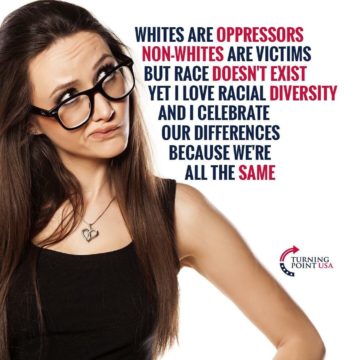 This all leads to the actual outcome of what these colleges are teaching. Which is real discrimination. Tuns of it. Universities are now debating over separate dorms for black people, because they supposably deserve higher-quality living conditions for being a minority. After asking one of my friends how her first year at college went she replied, “great, I’ve already been told I should apologize for black people’s misfortune.” In the past decade our nation has become more divided than it has been in 50 years. Why should an individual apologize not only for something we thought was annihilated half a century ago, but something completely out of their control? Brands like Target, Netflix and especial Google have made pushing homosexuality a common practice (all to be socially responsible marketers of course). Look around during the month of June and you’ll find tuns of websites with rainbow backgrounds in support of gay-marriage. That might not seem wrong to the supporters of gay-marriage, but you have to look at this universally. During Christmas we don’t see Christian flags and crosses posted on global websites. In fact major retailers seem to work quite hard to ensure that cashiers don’t say Merry Christmas and that the references to Christ are never found on any “holiday” item. So these same major corporations can’t even say Christmas on the day of Christmas… but yet they’ll gladly put rainbows everywhere for the entirety of Pride Month? How are these actions not discriminatory against the 70% of this nation that identifies as Christian? When discriminating against anyone who is white, male or Christian becomes common practice, this is no longer about equality.

Google is the worst offender of politicalizing Socially Responsible Marketing. It’s almost as if it’s run in its own little bubble. They treat social issues as if everyone should universally agree on them, and that is why the internet is full of people who will absolutely explode when exposed to a differing opinion. While taking a survey on YouTube (which is owned by Google) I learned that they had a program specifically for tackling “social issues” (YouTube Creators for Change). Keep in mind this is the same YouTube that almost had Hickok45 shut down for educating people on firearms, blocks Louder With Crowder episodes from teenagers and regularly deletes videos considered “controversial”. However here YouTube is promoting social activism, which can get very political and controversial. In fact YouTube’s terms reviled they will demonetize videos which are deemed political, since it can be too controversial for their advertisers. This means the creator of a political video can be denied his source of income because YouTube would not stand up for free-speech. Funny how they claim the reason for this is to be advertiser friendly, yet they’re currently running an ad for a former Mexican president exclaiming “Mexico will not pay for the f***en wall.” So I guess only YouTube Creators for Change and the Advertisers are aloud to be controversial? Meanwhile common folk have to sit down and shut up. 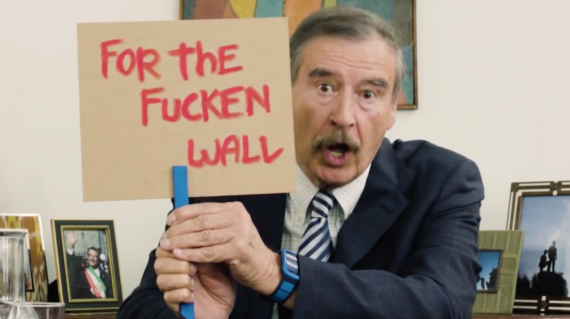 What inspired me to write this article today was after I had sat down at my computer to listen to some music. When a YouTube ad popped up… which was officially sponsored by Google. Its main point was to promote social activism, by claiming America isn’t free and black people are still oppressed due to their history of slavery. Keep in mind most of us use Google, and they are making political statements as divisive as this. I could debate all these topics till the end of time, but that doesn’t change the fact that a global corporation is making social statements as significant as “America isn’t free”. They are trying to influence American politics and society through their media platform, and doing everything they can to silence opposing views. That’s the most unsettling part about all of this. And in this case we can only fight back with independent information. I doubt it’s possible to boycott all of Google in this day-in-age and still make a dent in their revenue. If Google wants to battle for the hearts and minds of the people, we’ve got to speak out. While liberal businesses will continue to use Socially Responsible Marketing as a way to publish propaganda across the United States, they’re only wasting their money if Americans continue to listen more to one anther than the media elites.