Slander is an interesting thing. I’ve always debated with myself whether slander should be illegal or not. On one hand it’s intent is to use false statements to hurt someone. On the other hand the interpretation of what is and isn’t “false” has lead to an abuse of these regulations. In reality people should take the responsibility to fact check what they hear, but it’s hard to do that when the same slanderers control educational resources. This election created some chaos in the whole field of free speech. The term “fake news” came about when liberals wanted to prove that Donald Trump’s platform was just for conspiracy theorists. It backfired when liberal media like CNN and Buzzfeed would not stop posting false news articles. Hillary Clinton told people mid-debate to visit her website to “fact check” Donald Trump (which is probably the most unreliable way to fact check a political opponent in the history of the universe). And the vast majority of college professions and textbook contributors identify as “liberal.” So where do we determine what is the fake news and the slanders when even our educational sources are bias? Well currently I don’t believe that platform exists, which is why skepticism is key in modern politics.

These problems makes it sound like we should just outlaw false and harmful statements, but there’s nothing we can really do. Even with our current laws, which have been used to silence innocent people, we have still been unsuccessful in preventing the type of slander we see every gubernatorial and presidential election. What founded my basis for this article is once again the slander and propaganda that has been pouring out of Los Angeles. For some reason I can’t avoid Los Angeles’ claws as they infect everything from Netflix to YouTube with political motivation. 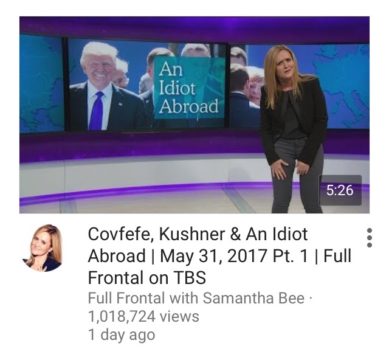 On my YouTube app I have to scroll past “YouTube Red” in order to see my recommended videos. For some odd reason I have not gone a day without seeing Donald Trump horribly insulted in a YouTube Red video. These videos are, of course, from mainstream networks like Comedy Central and TBS. While some things I can slightly tolerate from Comedy Central I still can’t stand even a 5 minute video from TBS’ Samantha Bee. It’s not because she’s a women or has a forced audience or get’s all the praise for reading off a teleprompter, but because she’s so heartless, sassy and constantly angry that I don’t even know how liberals watch her program. She’s the type of Hollywood liberal I would expect to pose with a decapitated head of Donald Trump (but Kathy Griffin beat her to it). Her program doesn’t put facts first like Afterburner with Bill Whittle or has moments of agreement like Louder with Crowder (both conservative commentators). It’s just a constant barrgage of “I’m right cuz I have an audience who will undoubtably cheer, whether real or fake, if I say something controversial as if it’s 100% truth.” But still, I’m stuck seeing her videos pop up on a weekly basis. Focusing on the important issues like how Trump misspelled something on Twitter. 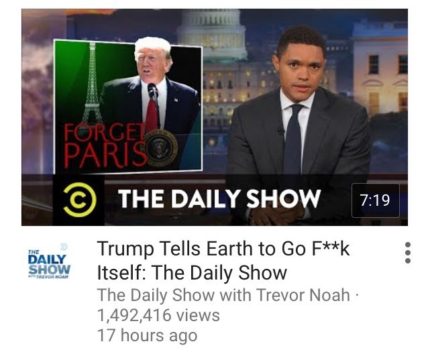 What really set me off though is this blatantly slanderous video posted by the Daily Show with Trevor Noah. It sums up everything wrong with the media millennials see on a daily basis. Not only is the title based off a conspiracy theory that Donald Trump just hates the earth, it’s a blatant lie because Trump never said “earth, go f*** yourself.” Much like half this country, Donald Trump felt that the Paris Agreement disproportionately harmed Americans, which doesn’t exactly make it quite the “deal” to begin with. This United Nation’s “deal” would have lost the United States 6 million jobs, required the United States to PAY for other countries to lower their carbon emissions, required the United States to lower it’s carbon emissions more than it’s physically capable of, and left industrial countries like India and China completely exempt to any regulations. That is not a deal, and it isn’t an insult to the earth when you say, “y’know, maybe we should expect more from other countries.” I for one expect this sort of regulation to be passed by our Congress, y’know like what our CONSTITUTION says. One of the reason for our Declaration of Independence was that the king was subjecting us to unions foreign to our constitution, which is exactly what these UN agreements are. The title to the Daily Show’s video should have been, “Media Tells Americans to go F*** Themselves.”

So what do we do when political commentary and “comedy” becomes means to slander the president? Well, nothing. This is exactly why Donald Trump won with very few advertisements. The mainstream media is killing itself, and although the left-wing may not realize it, these videos are only alienating themselves from the rest of America. Even if they succeed in making the millennial generation just as slanderous as they are, they’ll eventually collapse as all liars eventually do.

Lastly I’d like to remind everyone not to dislike videos on YouTube, even if they’re bad. With YouTube’s algorithms any interaction with a video, even a dislike, gives it promotion. The best way to harm the ratings of a YouTube video is to avoid watching it (or watch it simply to tell a broader audience why not to watch it). Don’t even worry if one of these programs pop-up as an advertisement, that just means they’re wasting their money. I can’t believe I’m saying this, but if you’re the average person who simply wants to hear the other side to the story, watch CNN on cable television. Sometimes CNN might be pretty bad when it comes to facts, but even they can’t touch the lies comedians and magazines get away with. Any politics you see coming from Buzzfeed, the Rolling Stone and Comedy Central is not news, and barely qualifies as political commentary. It’s propaganda at it’s best, slander at its worst.