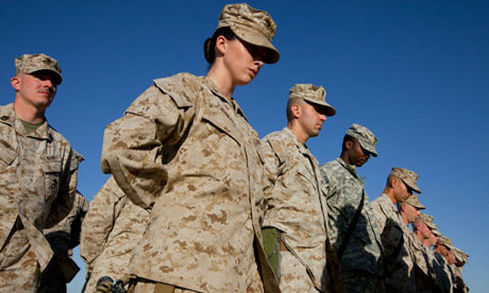 I’m not opposed to women being able to enter any combat job in the military as long as they are going through the same training and scrutiny as men. The reason I say this isn’t for some sexist argument or some stupid feminist argument, but because no soldier should go into any field underprepared for the job. Shockingly there are some people out there who wish to lower the bar to help women in, which is not only degrading to women who actually want to prove they can do anything a man can do, but also a safety risk to everyone else living up to a different standard in that branch of the military. The main argument I have seen is that there are apparently studies that say men in the military alone work more efficiently than with women mix in. Along with that some studies unrelated to the military say men and women prefer to work with their same gender simply because they feel more comfortable around someone who is physically the same. Not everyone is like this, and statistics can be horribly wrong (especially if you’re watching presidential polls), however it does make sense that the same gender /sex (/ whatever-the-liberals-want-me-to-call-it-this-week) working together would eliminate any drama or favoritism that might exist. So if we aren’t operating at 100% in the military because of someone’s political agenda, we need to come up with a solution. Instead of arguing for or against women in the military, here’s my view of the situation and my suggestion.

Neither women nor men are holding back the military, what is possibly putting lives at risk according to some is mixing men and women. So instead of kicking out a gender, simply separate them. I’m not the most knowledgable on how the military functions, but it seems to make logical sense if people work better with the same gender, give them the same titles and medals and standards, but have them working with the same gender when it comes to higher ranking combat positions. Otherwise, if we can’t afford it, if there isn’t enough women, or if it would waste too much time to organize, I’m not opposed to leaving things the way they are now. Again, our military’s main job is to defend and if we continue to hindering that with stupid political nonsense we’re defeating the point of having higher parts of the military. As for banning women from certain combat jobs like it was, I’m not sure that is the right course of action. Women who have gone through all the same things men have gone through should not be held back for minor statistics that are not one gender’s specific fault. Also since women are now aloud to enter any combat job in the military, I’m not sure any branch of the government would gain the majority to overturn it (unless Trump comes to power and misuses the executive order like Obama does).

Next is what we all saw coming. We know once trade opens with Cuba we’ll fight over what we’ll do with Cubans who escape to the United States, in the same way we knew once women were aloud into all places in the military, we’d have to fight over the draft. Men are suppose to register for the draft at 18 years old, however women do not. Many conservatives say it is “barbaric” and they will break the law to keep their daughters from being forced to register for the draft… yet whole heartedly defend boys at 18 being forced to sign up for the draft. This I can not understand. Some conservatives defend Israel like it’s the “free capital of the world after Obama took office” yet Israel drafts men and women at 18 years old, and I’ve never heard a conservative call that “barbaric”. Many conservatives are against girls being drafted because they see them as innocent and boys as ruff and tuff, but do you really think, in this generation, where Millennials are stupidly socialist and treat masculinity as a sin, that drafting us is really a good idea? World War 3 breaks out today, then what? We send a bunch of hippys off who think ISIS “isn’t that bad” and North Korea is “misunderstood”? They’ll probably desert at 3am on day 2! How is it that many of us conservatives own guns because we don’t trust the government, yet we trust them with the ability to send us off to get shot in a war we may not support? Simply leaving it up to the people to go fight or not should be promoted in our land of the free. World War 3 breaks out today, and we have a voluntary army of people who know the risks and chose to fight, that army will function perfectly- while the army of drafted Millennials will be busy trying to assassinate the Chaplain for being a “homophobe” and tearing down the flags for being “racist” and blocking off a section of camp as their “safe place” if someone yells at them. We’re the home of the brave, and the brave will volunteer if they believe they need to. But we’re also home to an increasing amount of babies who, if drafted, would probably cost us many many many lives. You’re answer might be the people who don’t want to fight will just avoid the draft, but in that case why do we even need a draft? Some conservatives are worried about a statistic saying the military doesn’t function as smoothly with men and women working together, yet aren’t worried at how forcing people to fight could affect how smoothly the military can operate?