Most Americans I would hope oppose burning the American flag. The flag represents us, the people, and everyone who has served under it. It represents every conservative, liberal, tax payer, patriot, and fallen soldier who worked hard or died hard to preserve this country. Some have taken down this flag because they believe the American people have gone insane and therefore the flag represents insanity. But the reason this is false is because these insane people aren’t real Americans and don’t represent this flag. The idiots and the zombies, they aren’t Americans. When someone is either pushing an agenda that would destroy the Constitution or what the people represent, you can’t call that person an American. And the reason I call these people idiots, zombies and insane, is because I can’t even title them rebels. Even the worst rebels in most cases don’t harm themselves with their own stupidity on a daily basis. When you see people out preaching “America was never great” that tells you right off the bat they are not American or don’t understand what they’re saying. In this country even people who hate the United States are free to buy a gun, say whatever they want, believe whatever they want, and preach whatever they want. Or at least Constitutionally they should be able to. So what do these people want if they don’t think these ideals are great? More than likely they want physical items. Free stuff and benefits for having a rough life. My question to these people is why don’t you just move somewhere else? If you want to “fundamentally transform America” to the point it can’t be recognized from its foundation, then what is the point of living in America? People escaped to here in order to find freedom, if all you seek is security over freedom there are plenty of other countries you can go to with the socialism you desire. 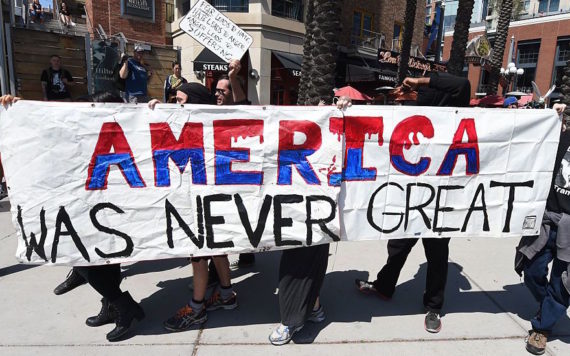 Sadly there’s no reasoning with those who don’t think America is or ever was great. They want a Marxist Revolution and they want it now. Since they don’t care about working they’ve got plenty of time to block our street, destroy veteran’s tomb stones and burn our flag. What perplexes me the most is they aren’t just ignorant ideology wise, they also lack the basics of common sense. This is why I wouldn’t call these people rebels, because even a rebellion has to be vaguely organized. They have about 4 different flags that none of them unify around. Even when they are unified around burning the American flag I still hear once every week about one of them accidentally catching themselves on fire. This is either karma or an example of just how dumb they are. I’m sure there’s a few who at least have common sense while trying to lead a rebellion against the United States of America, but all I’ve seem is a bunch of idiots catching themselves on fire, walking into traffic, and asking for policies that will never help struggling families. If the same United States was the first country to introduced a Bill of Rights to set the example for all other countries, gave women and blacks equal political authority, was the turning point in both world wars, got a man on the moon, and survived for over 200 years even with its people being free, how can you say that this was never once a great country? Consequently the only thing that would make America not great is if you tore down what the USA is. What is the USA? It’s one nation under God, indivisible, with liberty and justice for all. If you rather be in one nation under material, united, with safety and economic equality for all- then just go visit North Korea.

Seriously, it has nothing to do with bigotry or hating someone for their views. This isn’t a liberal vs conservative argument because I’m not assuming either of us are suppose to hate this country. But for anyone who hates America, burns the flag millions have died under, and never thought we were great, then why live here? Obviously we’re doing something better than the other countries, or at least have greater potential than any other nation for you to want to stay. Many people said if Donald Trump became president they’d leave the United States, now how could you ever expect me to trust you to have a positive agenda for this country if you say you’d abandon her. Every person who loves this land pledges to defend it and its constitution. If you think the purpose of being involved in politics is to get what you want and leave if you don’t, you’re obviously not looking out for the long term benefit of every American. The United States of America is this worlds last hope for freedom and that is why I will never leave. This is my country and I’m sticking to it. If you rather leave because of bad leadership, then please leave now. Cuz no matter how much you try to infect our government, the ideals of America will live on. So if you don’t like our liberty, our values, or our flag, there’s no reason for you to stay- real Americans aren’t going to abandon America.