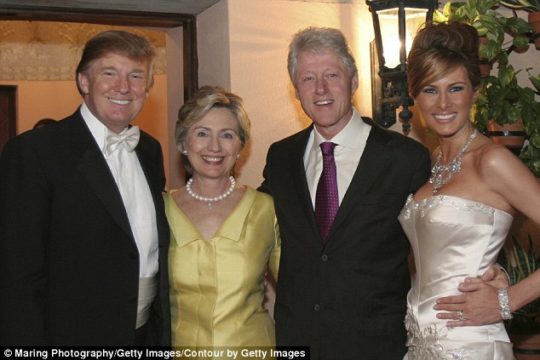 We have all seen the chaos that is our election this year. Donald Trump is definitely shaking up the Republican Party and turning the Democratic Party to rage. The problem is the reason for that isn’t exactly pure virtue. Trump has a tendency to be offensive, not really for any purpose besides the fact it is “politically incorrect”. This offends conservatives who want to take the moral high ground and debate honorably: it also offends liberals simply because they can’t properly handle the smallest insult. 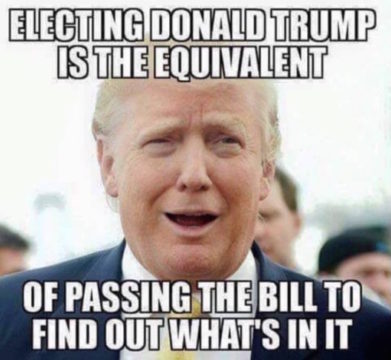 Trump also has an invisible contract on everything he says, which reads, “content subject to change”. Everything Trump has ever said politically has changed or at least is ignored for later. Even recent things you cannot trust him on simply because no one can change Trump’s mind, but Trump’s mind changes constantly. One day he’ll get up on stage, insult a few people’s appearance, then propose banning immigrants based on their religion. This is not only impossible, but unconstitutional. During this time Rand Paul proposed banning immigrants from certain high profile countries until we can properly vet them. Then guess what… Trump stole that idea. Funny enough he flaunted that but not his ban on Muslim immigrants at the Republican National Convention. Later he clarified it would be an “extension” to his purpose Muslim ban, but when you spend the whole night talking about foreign policy you gotta wonder why his ban on Muslim immigrants didn’t come up. Will it change just like his stance on guns, abortion, religion, and Hillary Clinton (which also may be subject to more change)? Only time can tell.

Speak of the devil, what’s about  Hillary Clinton? I mean sure she got Americans killed, covered up the emails, broke the law, rigged a primary election, hired those who helped her rigged the election, covered up her husbands affair, and pledges to overstep the 1st, 2nd, and 10th Amendments, but hey, first women president! …right? Sure her husband use to pander to the south and now she’s pandering to win over blacks and Mexicans while calling southerners racists, but she’s evolved! She’s not a back stabbing, lying politician, she’s just a progressive! You can tell by her pant suit that you can trust her to know what she’s talking about. Like the war in Iraq, open trade with China, and the Keystone pipeline, Democrats love those policies right?

Well if you don’t want to vote for the liar or the traitor, there’s always Darrell Castle. Castle is a limited government Christian constitutionalist, basically what Americans traditionally were and what it use to mean to be conservative. He believes the United States should be truly independent and our federal government should not subject us to unions foreign to our Constitution. Likewise he has spent many years studying law and has a passion to uphold it. Unlike the other candidate, Castle supports the 10th Amendment to our Constitution which states, “Powers not delegated to the a United States by the Constitution, nor prohibited by the states, are reserved to the states respectively, or to the people.” Castle wants to bring back constitutional law and keep the federal government out of the business of the states and the people. 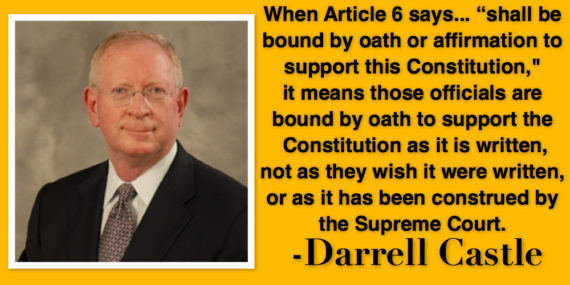 One of the most important topics at hand during this election is the fact our next president is going to be the one to choose our next Supreme Court Justice. The Supreme Court has been called to action now not in just abortion cases, but to rule whether executive actions on citizenship and firearms are constitutional. With how divided this country has become, law is no longer about right and wrong, it’s about who has the majority. Our Vice President was once the runner-up candidate because the best were suppose to rise to the top. At this point our system has let the worst rise to the top and then clearly divide every branch in our government. If the Supreme Court is willing to overthrow written law for the sake of political agenda, then the executive branch is the only branch the president will need to worry about. With Darrell Castle we can trust not only to get a pro-life judge, but a return to constitutional law where the next president will be held accountable if they try to overstep their constitutional authority. This is something I could not trust Donald Trump, Hillary Clinton or even Gary Johnson with doing. We already have seen Trump and Clinton promise to use executive action to get their way, but even Gary Johnson has sacrificed structured law in order to support abortion and same-sex marriage. Where Johnson would force Christian businesses to cater same-sex weddings and continue to enforce licenses to get married, Darrell Castle wants to privatize marriage and leave it to the people once again.

These are topics I find very important that the Republican Party seems to ignore. Although economics and foreign policy is important, it is pointless if we trade our liberty to combat the enemies of liberty. We must first eliminate our enemies in Washington DC before we bankrupt the country while trying to police the world or fund someone’s phone bill. Our government spends most its money on welfare and warfare and it will continue to expand with no permanent solutions at the cost of our economy and liberty. Like Charles Dyer once warned us, politicians trying to bring about globalization is a bigger issue than the borders right now. Our freedom, our independence, our God given rights, the things we hold dear are being threatened, and it’s not worth trading those things away for temporary victory. This is why I support Darrell Castle for president. He believes in liberty, the virtues that sustain it and our true independence. With a country divided by a culture war and threatened by so many things, we need this man to help lead us back to our roots.