(It’s late and I’m not 100% sure about the direction of this post. Hopefully it makes sense, but instead of throwing it out like I’ve done with several other posts I decided why not give it a chance. So with this blog post delve into what my brain manages to come up with after leaving the same ruff draft open on my computer for a full week.)

We’ve seen the United States of America torn apart by politicians who know nothing about how their actions affect the masses. Each major presidential candidate does not only seem oblivious to what they’re doing, but also to their own image. On the right side we have a man who has brought debates so low as to have created a conversation about the size of ones junk on live television. On the left side we have a women who has managed to pop up throughout every major federal controversy since 1993, has a long line of mysterious deaths behind her and has considered half of America’s Republican leaning voters to be in the “basket of deplorables…. racist, sexist, homophobic, xenophobic, Islamophobic.” These are our two options, someone who’s willing to fight dirty and one who’s willing to make up lies to seem like she’s got the moral high ground while still fighting dirty. Both aren’t really perfect examples of America and I’m quite surprised that they even need to lie to make their opponent look bad. 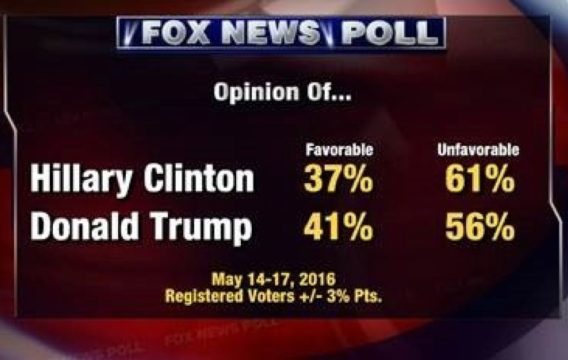 Well… actually our presidential candidates don’t need to lie. Americans already know how horrible their options are. The majority of Americans would like a do-over this election, but sadly we’re stuck with some pretty unappealing options. What scares me the most however is not their direct policies, but how one seems to promote hatred between parties while the other does nothing to prevent it. When Hillary Clinton defines half of her opponents as bigots (and that her greatest enemy “is the Republicans”) anyone who’s against her now feels attacked, while anyone who is for her now is being swayed to believe America is full of more bigotry than the countries Hillary gets her donations from. Hillary Clinton is not uniting America, her words are making people do anything to beat her or do anything to beat the Republicans. Sadly Donald Trump is not apologizing for many of the offensive things that he has said, which only strengthen the hatred between parties.

I’ve seen some people online amazed at Donald Trump’s backing in the polls. They question, “Why does Trump have any voters?” and sometimes answer their own question by stating, “America must be racist!” To start, most Trump support are not racist. A majority of Trump supporters simply care more about economics and see Trump as a good businessman. There are people who are more into economic policies than social policies, but that doesn’t make them racist. Trump himself said he’s more of a jobs guys, so I would not call the man racist for not understanding fields he’s not as involved in. He wants to bring jobs to African Americans, legal immigrants, whites, women, men, gays, Christians, Jews and I would even stretch to believe American Muslims too. While his social policies might not be all to bright or constitutional (and I’ve opposed him for that) that does not make him a racist. Maybe he secretly is, but America also voted for Barack Obama who I’m pretty sure we can confirm is a secret Communist. If you’ve trusted Obama for this long you gotta give Trump the benefit of the doubt. 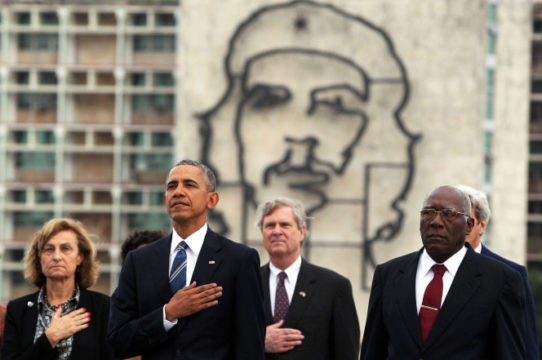 Another part of Donald Trump supporters are those who opposed him in the primaries, but see him as the lesser of two evils (I’m in this boat believing he’s the lesser of two evils, although I have not been convinced to join the “Trump train” yet). Why would anyone see a loudmouth like Trump the lesser of two evils? Well have you seen him listing off all the “deplorable” things Hillary supporters are? Has he ever failed to take care of fellow Americans when they’re calling for reinforcements? Do you see him being the leader of the party that that threaten his own National Convention? So far we’ve seen in a matter of a few months liberals protesting simply because other’s want to vote against them, protests against the Star-Spangled Banner and walls built at the Democratic National Convention to protect themselves from fellow Democrats who were catching themselves on fire while trying to burn the American flag outside. 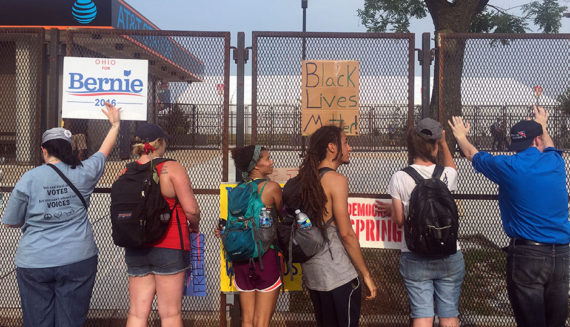 This is insanity, and it’s all because Trump is unapologetic and Hillary is bent on sending Democrats into anarchy. At this point it is not unlikely to see Donald Trump compared to Hitler in the news. Here’s a newsflash, both Trump and Clinton are opposed to constitutional law so either one could be just as tyrannical. Neither speaks of restoring authority to the people but simply ramming us towards social liberalism or economic conservatism with complete disregard for the law. If you’re not voting 3rd party what you’re voting for is either the few good things about a candidate or simply a buffer to get us to our next election. Whichever candidate we have to deal with for the next 4 years, the National Socialists have yet to rise up. If National Socialism (Nazism) is right around the corner like the media would like you to believe, I’d suggest actually making friends with the Trump supporters carrying around guns, because they’ll be the only ones left to fight against martial law. 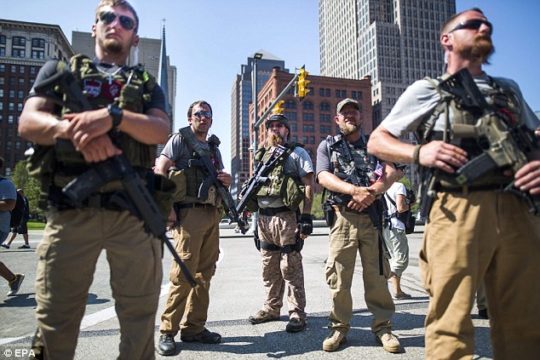 Stop acting like every American’s either racist or a communist, either we’re all stupid or all stuck with corrupt choices. What we really can do is look out for one another instead of attacking one another.