The first section of the first article of the United States’ Constitution states “All legislative Powers herein granted shall be vested in a Congress of the United States, which shall consist of a Senate and House of Representatives.” Much authority and responsibilities was given to the United States Congress, because the Senate was made up of state representatives and the House was made up of the people’s representatives. This allows both the State as a whole, and local districts to be represented in the United State Congress. Federal laws, impeachments and most amendments have to go through Congress. They are suppose to be the branch that represents the people the most, because they are our bridge to Washington. According to the 10th Amendment “the powers not delegated to the United State by the Constitution, nor prohibited by it to the States, are reserved to the States respectively, or to the people.” Meaning the United States Congress, Courts and President have no authority over matters not delegated to it by the Constitution. The Constitution is a document telling them what they can and cannot do. This is why in order for the United States government to ban Alcohol, they had to pass a Constitutional Amendment (which was passed by an overwhelming majority of Congress and States). In order for Congress to pass a federal income tax an amendment first had to be pass giving them the authority to do so.

Imagine if the United States government still obeyed our Constitution? If, in order for the Supreme Court to rule same-sex marriage a “Constitutional right”, the Constitution would actually have to say something about marriage? You could argue that government has no authority in marriage to begin with; but then why do they still requiring the people to purchase licenses to be married in their own churches? Imagine if a Constitutional Amendment had to be passed for Congress to ban certain firearms or ammunition. Obama tried to ban green tip 5.56 through the ATF. I’m sorry but wouldn’t most people consider a ban, a law? Something only Congress has the authority to pass? Even then it can be questioned whether any laws on firearms can be regulated by the federal government, because they have no authority to regulate firearms under the United States Constitution. There are hundreds upon hundreds of things that are suppose to be reserved to the States, that the federal government has taken for itself. This is what people are referring to when they talk “States’ rights.” This is also why when the United States government “shuts down” it barely affects anyone. The State authority handles more issues (and were suppose to handle more issues) than most people understand.

Why have I brought this up today? Because my biggest fear under Barack Obama was his lack of respect for our Constitution. Without these legal safeguards our government is breaking the laws “We the People” placed upon it. The United States’ government only exists because of the people, and it’s the people’s responsibility to regulate it. This is different than any other nation, because the law-of-the-land puts the people in charge. The Militia, the 2nd Amendment, only exists to keep the government from overthrowing the States and the People. Now, under Donald Trump, I have the same concerns for our Constitution. Taking away from Constitutional Law could cause the entire structure of our government to fall apart. Anything is legal or illegal depending on who’s enforcing what laws. From one president to the next we will become an elective monarchy if we allow the executive branch to dictate the nation. Laws are only legally allowed to be passed through Congress, and if presidents use executive orders to place laws on the people then each president is essentially a dictator. President Trump has now joined in on this war against the people’s authority.

Trump wrote an execute ordering demanding the ATF ban bump-stocks. No matter your opinion on bump-stocks, this flies in the face of the entire Constitution. There is no law banning bump-stocks, executive orders are only used to enforce the law, and the ATF has no authority to create new laws. They are using legal trickery to say “accessory that increase the rate of fire” can be classified as “machine guns.” However the legal definition of a machine gun is a firearm that fires more than one round with a single function of the trigger. Bump-stocks do not fall under this definition. The press secretary made this very clear when she said, “The President did sign an executive memo directing the ATF and Department of Justice to work on outlawing bump stocks, so we don’t have to wait for a legislative fix.” They are directly overstepping their authority as the executive branch and are trying to do the work of the legislative branch. Congress has this soul authority and it’s an insult to anyone who’s upheld our Constitution to do such a thing. I have come to expect people treating Acts as Constitutional Amendments, but to treat an executive agency as a congress completely shreds an entire branch off our 3 branch government. The people have no control or influence over these federal agencies, except asking them kindly “please don’t do that”. These bans should require amendments, and at the very least a Congressional vote. The reason we have gotten to this point is because our federal courts refuse to defend the Constitution as it was written. They veto executive orders enforcing our current laws, but enable executive orders that do not wait for the legislative process. This is mostly our fault. Because our refusal to recognize religious absolutes anything and everything is now relative. So even our Justices, President and Congress may treat our laws as mere suggestions. 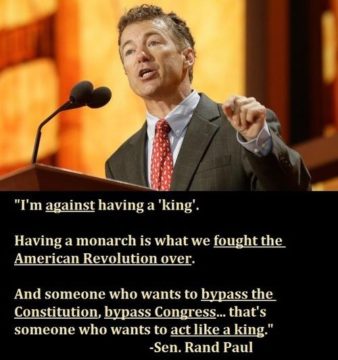