I write this at 2am July 20th in praise to God. Today I was getting depressed over the current state in our country and how that every one of the top 3 political parties seemed to have nominated candidates with no understanding in how to preserve the Constitution for the long term. Hillary Clinton lacks a value standard and will only further cripple the middle and lower class of America by regulating businesses and expanding the federal government. Let alone the fact she still doesn’t understand her husband’s Assault Weapons ban failed already, we don’t need to try it again. Gary Johnson as the Libertarian Party nominee plans on limiting the government, but lacks the religious virtues that would sustain this country after we free it. A people with no reason to do good will do everything bad first. Unlike full on libertarians I believe people are born sinful and we still need to protect the right to life. This includes giving hope to the youth, promoting strong family bonds, and defending the lives of the unborn. Also even though he’s the Libertarian nominee, he still has a less libertarian view of marriage than Rand Paul. Gary Johnson still believes the federal government should have control over marriage instead of privatizing it. Then there’s Donald Trump. He was pro-choice forever, supports huge federal agencies, large military spending, bulk data collection on citizens, and worst of all has a mouth that could piss off so many Americans that a conservative will never get elected again. So what was I to do? I started seeing how everyone’s killing each other and Christians are being treated like demons and kids programs are now putting homosexuals on TV and it seemed like Trump was our last hope because at least he said we’d be saying “merry Christmas again”. With Clinton and Johnson I knew there was no return for virtue, and at least with Trump there’s that 1% hope. Then after having a near panic attack I spent the day researching the Militia Movement as usual. Cuz hey if it’s the end of the world I want to know where to find the good guys! However then I took a look at the Constitution Party again…

Several years ago I first heard about the Constitution Party while researching the Libertarian Party. I even thought about preregistering to the Constitution Party. They’re a party of paleoconservatives (the opposite of neoconservatives) and seemed to be very comparable with my views. One thing I heavily disagreed with was how the party seemed to go about pushing against homosexuality. I’m a Christian and believe in the whole Bible, therefore I believe homosexual thoughts and acts are sinful. That’s a whole other argument for a whole different day, however according to the Constitution Party’s website they’re against not only same-sex marriage but also same-sex couples being able to have recognized unions or ability to adoption. That seemed too extreme for my liking and I went to the more generic Republican Party. Well today (July 19th) in the wake of Trump’s nomination I went back and emailed the Constitution Party asking them about the same-sex marriage thing and if I’d still fit in the structure of the party. At this time I was still thinking I’d be stuck voting for Trump anyways, I just didn’t want to stay registered Republican while he’s our nominee. Then I saw the Constitution Party had chose their nominee as well. I was very skeptical when I first saw him since I just got done re-reading the party’s website, but then I looked into his campaign website and podcast website. He was very limited government, supported traditional values, and was for limiting government spending. At the same time he was very calm and didn’t upset me while talking like the other political candidates. His name is Darrell Castle.

Darrell Castle is a highly educated lawyer who served in the Vietnam war. He’s been with the Constitution Party since the beginning. While listening to his podcasts I learned we both have great distrust in federal agencies, think socialism sucks, and love God. During this time I started thinking how his campaigns doing. The Constitution Party hasn’t posted a YouTube video in over a year, and Castle’s social media profiles are only moderately updated. This doesn’t look good for a campaign that can only survive off grass roots efforts. Well at this point I hear from an interview I left running in the background, and Castle was being asked about social issues. When confronted with his views on homosexuality he said he’s a Christian so he believes it is wrong, but does not think the government should be in control of it or that we should need licenses to marry. The exact thing me and Rand Paul have been saying just came out of the nominee for the Constitution Party! This was the main topic I was worried about and the dude hit the nail on the head. All these never Trump republicans who have been looking for a 3rd party candidate, THIS IS THE GUY. We’ve got a Constitutional Conservative Christian running for president and he’s found in the Constitution Party. Many people might think I’m insane for getting behind this guy but my reasoning is simple, he’s the good guy. We’ve already been over what I think of Trump in my post about him several months ago. As for Hillary she has hurt just about everyone in America. Soldiers, southerners and minorities. Maybe if her economics didn’t steal jobs away from low income families and her corruption didn’t get soldiers killed overseas and in our own hospitals I’d be a bit less harsh on her. However this is not the case, instead we’re stuck choosing between the most disliked candidates possibly in American history- I think it’s time to put an end to this. In order to restore the Constitution and to avoid further destruction we need Castle in office or at least out there to further this conservative message. That’s why I’m writing this. I’m going to do everything I can from now until mid-September to get this guy on the debates, his voice deserves to be heard. Instead of a fraud or a traitor let’s stand by the Constitutionalist. 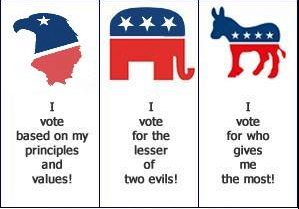 Many people will doubt Darrell Castle’s ability to win as the first 3rd party candidate, but with over half of the Republican Party unsatisfied with the nominee and 40% of voters not turning out to vote, maybe Castle could spark some interest. Like he said, this is America’s last hope after this there is no turning back. If God can create the heavens and the earth He can get Castle into office. Still in a Republican form of government with Democratic principles in our elections, we as believers in traditional values and limited government must join together behind this man. Let’s try our hardest to do the campaigning this small party can’t do and take this country back! (15% in the polls gets him in the debates this September).