Over the last 24 hours Democrats have been sitting on the House floor to protest “gun violence”. Yep, aren’t they so brave for protesting violence by hiding in one of the most secure buildings in Washington D.C.? If this was about violence committed with guns you’d think they’d stage a protest in one of the liberal cities plagued with massive amounts of gang violence committed with illegally possessed firearms. Sadly this really isn’t about violence or terrorism or even preventing a crime, it’s about control. After Congress voted against the 4 proposals that would have harmed more innocent people than terrorists, the Democrats staged a sit-in. They’re upset that Republicans don’t want to continue to vote on another gun control policy that is just a conglomeration of all the horrible idea’s that they voted down a few days ago. If Democrats had their way the attorney general would be able to deny our rights simply based on suspicion and people on the No Fly List (who aren’t even aware of being on it or how to get off it) would be denied their rights. Remember the No Fly List is the same list that kept Senator Ted Kennedy from getting on a plane because “T. Kennedy” had been used as an alias by a completely different person. That’s the accuracy we’re dealing with.

Giving the government the authority to secretively deny a right not only oversteps due process and is harmful to our liberty, but also does not make us anymore safe. Remember how Omar Mateen’s old employer let him off the hook because he didn’t want to discriminate? Well who’s to say that the far-left liberal Loretta Lynch (who pledge to defend Muslim communities from discrimination and violence) would also have let Omar off the hook for being Muslim? There’s still a chance that Omar could have legally purchased his firearms even with an over powerful attorney general. Omar was no longer on a watchlist or the No Fly List so those bans aren’t going to help at all. Now let’s say Lynch did start blocking firearm purchases. Since those people were never convicted of a crime, does this mean not even the president could pardon them? Someone needs to explain how they can punish you without being convicted of any sort of crime. This amendment to a spending bill could quite literally give the attorney general the authority to deny rights and even with the president’s favor you still might be stuck. Not only that but we have to return to the original question. Are Democrats asking Lynch to start profiling people and deny them of their rights based on how suspicious they seem? Couldn’t this lead to racial profiling? Or is this part of a bigger scheme. Are Democrats going to start using this to suspend the rights of their political enemies too? They’ve already called pro-lifers’ “violent extremists” and Militia members’ “terrorists”. Letting the Democrats have their way would actually allow the attorney general to have so much authority that if she wanted to she could deny every member in the NRA their 2nd and 5th Amendment rights for being suspected of terrorism. No one person in the United States should have that kind of authority, and it’s insanity that Democrats should treat this act of protest as some kind of war for social justice when them themselves are trying to give the attorney general the authority to profile and possibly deny rights to minorities and activists. House Democrats are only pulling this stunt to try to make Republican’s look bad and themselves look more relatable. Sad thing is they’re liberal politicians, they’re not doing this for any other reason other than to pass an agenda that we all know oversteps basic human rights. 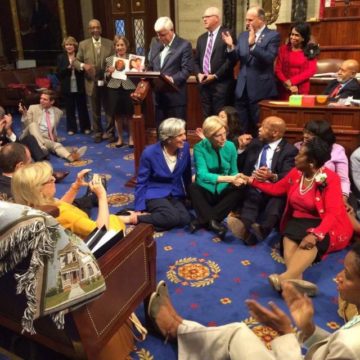 I’d also like to suggest reading a bit of this article by Matt Walsh, he really went after these Democrats last night in his article: http://www.theblaze.com/contributions/democrats-you-arent-brave-for-standing-against-the-bill-of-rights-youre-tyrants/