Several weeks ago I wrote an article about atheistic evolution and how I don’t understand where they get any moral standard other than “the strongest survives”. Well this is quite similar to the confusion I get when liberal’s try to explain rights. According to our declaration of independence these American Revolutionists believed that a right is something given to us by our Creator and can never be taken away, and that among these rights are “Life, Liberty and the pursuit of Happiness.” Sure tyrants can try to suppress a right, but they can not physically take it, when you are free from tyranny your rights naturally exist. This is the great test of “what is a right”. If there was no government you’d still have your God given rights, therefore rights are not something that can be offered or purchased. The “right to bear arms” is not the “right to arms”, you simply have the right to obtain arms, you do not have the right for someone to give you a free firearm when you’re born. Therefore any commodity, service or object is not a right, you simply have the right to pursue it. Hypothetically, if rights were God given and also physical then God would have to be like Santa Claus and magically deliver all the “rights” you deserve, along with free cash to spend on whatever furthers your right to pursue happiness. This is the basic argument between traditional Americans, and liberals. How do we define the pursuit of happiness as a right? 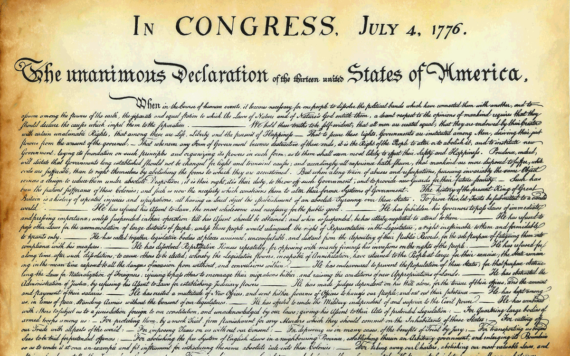 Ronald Reagan once warned us how socialism would come to America in the name of liberalism (he even did this by quoting a socialist). Funny enough, 50 years later we’re letting the socialists win. Liberal media and organizations have used the term “right to happiness” when arguing for government recognized same-sex marriage, open borders, mandatory social security, employment and free healthcare and schooling. Whether sad or obvious, these things are not rights because they all require the government or infringing on other people’s rights. However maybe this is neither sad nor obvious if what liberals believe as a right is true. When I hear politicians using the fraise “right to healthcare” as an excuse to use tax dollars for “free” healthcare, I wonder if the same politicians would be so helpful as to offer me programs that will get me free and/or affordable firearms in order to pursue my right to bear arms. That’s just it, their idea of rights aren’t about liberty, they are about what sounds good and fun to the majority. Y’know under liberal thinking I think it would be awesome if poor kids had a right to a free fun day at Disney World, after all they have a “right to happiness”. But this isn’t how things work, eventually you run out of tax dollars and then no one can pursue happiness because you spent all their money on mandatory charity.

Now I’ve been bashing on liberal economics for a little bit, but I’d like to explain why letting people pursue their own happiness can still work. With socialism everything sounds good on paper because so many poor people get benefits. The issue with socialism is that it involves increasing government and taxes universally, which keeps businesses from making a profit and the poor from getting employed. Eventually you run out of other people’s money and everyone is equally poor. With free-market capitalism taxes are reduced and businesses can thrive, poor people can find more job opportunities, and new businesses can have a better chance of making a profit without having to worry about major taxes. The problem people see with capitalism is that the government can no longer pay for free things; leaving people who have nothing, with nothing. Well this is why capitalism requires people to have good virtues, like in any free nation. If the government wasn’t taxing fifteen to twenty-five percent of the middle class’s income, imagine how much we could help those in need by voluntarily giving 10% of our income to churches and charities? Capitalism isn’t perfect, but it puts faith into the people and let’s them pursue their own happiness- while socialism takes everyone’s money and forces everyone to trust a small group of people to hopefully spend it on things that will make us happy.

Quickly I want to go over why the liberal “rights” I mentioned aren’t actually rights.

Marriage- Forcing your marriage to be recognized by everyone through the federal government may infringe on other’s personal beliefs. You have the right to freely exorcise your religious beliefs, or lack thereof, but you cannot force churches and religious people to believe what you want them to believe. This is why I now oppose marriage having to be recognized by the government. If you say you’re married to a chair then you have a right to believe that, and I have the right to believe you are not married because only God decides that. Likewise if I went to the pastor at the “Church of Chairs” they hold the right not to marry me to a human girl. I know it’s a ridiculous analogy but it’s the only way people will understand what I’m talking about.

Open borders- Neither opened nor closed borders are a right, but people do have a right to do what is necessary to defend their rights. If a people form a government and make it law for the government to protect their homeland from foreign invasion, then entering that land against the people’s laws is at least the equivalent of trespassing.

Employment- Businesses are not owned by the employees and therefore employees have the right to quit for any reason. This is why I equally believe employers have the right to fire employees for any reason. If people don’t like a business for these reasons, they can protest against it. Therefore we do not need the government telling business who they can hire and who they can fire, simply let the people decide which businesses thrive by where they decide to work and spend their money.

Free healthcare- You do have a right to pursue healthcare, but healthcare is a service and it is individuals job to find ways to pay for it. This does not mean that their can not be charities and organizations that help with paying for medical expenses or making insurance affordable, but that doesn’t make healthcare a right.

Education- Being very similar to healthcare, you have a right to educate yourself, but forcing people to pay for your education is not a right. Again, your “right” to have an organized institution educate you on specific topics for free would not exist without government redistributing wealth, and although that sounds good it does not make something a right.