(This is what happens when I get upset at the king and have Pages open on my computer, enjoy)

So after our dictator signed America into a pledge to dump millions into fighting the weather, I’d like to address how democrats have been brainwashed so much that they can’t see the sheer stupidity of these policies. Progressive are taught that their policies are not just right, but an undeniable fact. It gets burned into their heads that they’re way cannot fail no matter what. Democrats claim to be accepting, but the truth is they’re only accepting to people who are willing to denounce anything that might contradict a single progressive policy. They use this “safe place” from other people’s views to ensure they’re about as brainwashed and headstrong as Hitler’s Youth. This is basically why Jim Webb had to drop out of the Democratic race so early, he wasn’t socialist enough for modern democrats. They even name themselves progressives because they really do believe as long as they’re making political gain it’s “progress” no matter how bad the outcome is. Obama actually knew obamacare was a fail, but they pushed it anyways, Bill Clinton’s assault weapons ban skyrocketed gun crime, and at the peak of the recession obama’s dictation took out thousands of jobs created by the coal industry which worsened the financial struggles for many many Americans. All these policies that progressives keep saying, “work” and are “progress”, actually have hurt us. Even when liberal policies fail they still are allowed to continue raising millions of our children through the media and schools. So don’t worry, Disney Channel and Michelle Obama will make sure that your children can sleep happy at night knowing that their daddy was evil for being a miner and that it is indeed “progress” that he lost his job and can’t buy a gun to protect them in their newly appointed government funded ghetto, not in fact the destruction of any chance of them becoming free and independent Americans.

Any idea why Climate Change can’t be disproven? Maybe because it’s bloody climate change! Of course the God dang temperature’s changing, it always has. These liberal scientist believe an ice age happened yet can’t comprehend that the weather can get warmer without it being the fault of humans? This isn’t science it’s an invisible enemy that gives liberals millions of dollars to continue suffocating America’s youngest generations in debt. Gun control doesn’t work, going green (although it does have many real benefits) doesn’t stop the weather from changing, and socialized healthcare isn’t affordable. Progressives however are the people who have been brainwashed by television, the “educational system”, celebrities, and politicians that these polices just work, period. As soon as a shooting happens you get thousands of progressives swarming to take advantage of these people’s deaths asap. “MORE GUN CONTROL PLEASE!” they cry to our savior obama via Twitter. They don’t morn or pray or at least wait for families to catch their breath, they take advantage of fallen human beings expecting that all of us believe “gun-control” is the only thing that could possibly prevent mass shootings. Here’s an idea people, we don’t need more of something that has failed in the past, stop asking obama to save you and buy yourself actual protection. You want to be free? The government can’t grant you that. Free crap and a police state isn’t freedom. We should all be equally free, not equally oppressed. But now i’ve come to the conclusion most democrats are like obama, not even the minority of “not completely brain dead” democrats can convince progressives that the progressive agenda might have some faults. 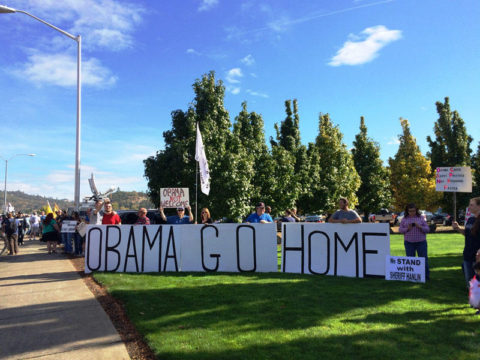 Obama must see these signs in this photo and think he’s fighting some kind of racist extremist filled country that hates him for being the leading voice in progress- when in reality these were once silent Americans who are now extremely pissed off at the president who is suppose to be representing them but instead took advantage of their fallen neighbors. The policies he’s been pushing have killed millions in other countries and the day fellow Americans have died obama has no shame in exploiting them for his political agenda. When visiting the state, he obviously has no respect for, obama was met with these protestors and you know what, God bless them. Obama is suppose to represent us, but all I see is a psychopath who is either completely retarded or has a grand plan for the utter destruction of the United States of America. It’s horrifying to think how brainwashed his poor daughters must be being raised by this man-baby who still thinks we live in the 1960s. With all the criticism obama gets I use to think to myself, “I wonder what he’ll be thinking when he sees this”, but now I’ve realized there is no convincing him. He probably never listens to the logical thought out criticism he receives on a daily basis. He doesn’t click on those YouTube videos made by conservatives, or read articles from Fox News or The Blaze. I mean for God sakes he’s one step away from putting every person working for Fox News on a terrorist watch list. Obama is not just out of touch, he’s in his own world and will not stop till he get what he wants. All we can do is challenge his agenda through Congress and hope to God he doesn’t start a civil war in the last 326 days of his dictation. Just let him know we’re ready if it goes there.