Sadly most forms of educations currently ignore any opinion other than that which promotes security over liberty. It is a very complicated and illogical system that makes slavery look like liberty simply because it is easier to handle. From elementary to college there’s this hidden system at work, and it doesn’t end there. As big-government politicians try to keep the average human stuck longer and longer in their campus bubbles, those who’ve managed to gain any sort of independence still have to survive the onslaught of false information coming from the major media. Most popular sources of voluntary education, such as the news and promoted books, are written and controlled by the same political bias running our colleges. Journalism is dying because journalists learned journalism from the same educational system. It’s only those who have avoided the brainwashing or who were aware enough to draw their own conclusions that offer a fresh idea or an unbiased take on things. When new conservative activists attempt to speak at colleges they are faced with sometimes ridiculous reactions from the students, security and faculty (search “Milo trash can girl” if you don’t believe me). Millennials are being raised by liberals to think the liberal opinion is the only one that exists, and all that disagree are some kind of extremist.

I’ve talked about our broken education a few times and how it is harming the youth mentally and our country politically. However something that I haven’t talked about the “educational” sources given to the population outside of schools. Once surviving school and maybe even college, we still deal with an obviously bias news media on every kind of platform. YouTube limits the promotion and age that can view conservative commentators, but promotes very liberal groups like BuzzFeed and The Young Turks. Twitter has been deleting well known conservative activists or removing their “official” icon for no reason. Facebook has been caught suppressing trending conservative topics. And while on TV you might get The Blaze or Fox News, they are still greatly outnumbered when facing pretty much every other news channel on television (CNN, MSNBC, CBS, ABS, Etc.). So even when people want to educate themselves on what is currently going on, they are fundamentally tuning in to the same thing. There are at least two sides to every story, yet in most cases we only see one person’s perspective on the situation.

The consequence of people buying into what Hollywood sells them is that they have no idea what a brief look through history reveals. Such as when forty years ago global cooling was what media told us is the thing we should be panicking about, or how Ronald Reagan warned us that socialism would come to the United States through liberalism, and that freedom is only one generation away from extinction. Well after eight years of the Obama Administration, America’s youngest generation is holding favorable views of socialism. There was foreshadowing, this is nothing new and this isn’t some kind of revolution that wasn’t already planned out by some big tyrants in Washington DC. History is being covered up, and it’s up to those who lived through it to speak out. When I was in elementary (which was literally one presidency ago) our textbooks told us the Black Panthers were the basically the African American version of the KKK. We were blatantly told about the greatness of Martin Luther King Jr. and the violent nature of Malcolm X. One was a pacifist leaning Baptist and the other was a violent Muslim who believed black people were the chosen people and white people were devils. So in example, MLK represents peaceful protest and Malcolm X represents constant rioting. What we were taught as good and evil simply eight years ago has now returned in the name of “Black Lives Matter.” Malcolm X and the Black Panthers are now viewed as some kind of righteous activists of human rights. This all has been happening under one president, which we thought was finally going to unite us. Why under America’s first black president are people rioting over racism? I think it’s obvious to see that he had never planned to keep the United States united in the first place. 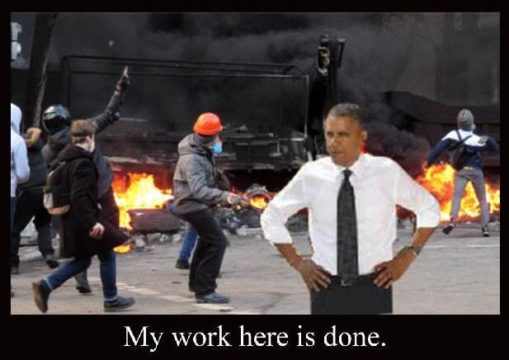 Part of my education just eight years ago taught me about the genius behind capitalism and why the United States of America is able to offer better services than any other nation. Unlike socialist nations where services are held back due to government run monopolies, in the United States there is competition which forces businesses to improve. This competition offers differing prices, qualities and coverage accordingly. When you redistribute wealth and then use it to pay for things such as healthcare you not only harm a massive amount of people with taxes, but decrease the quality of healthcare. I learned about people who had to wait months for service in Canada due to their healthcare system, and that was before I was aware what Barack Obama would try to pass in the United States. Welp, six years after Obamacare was enacted healthcare premiums are about to skyrocket and less than five percent of this country was actually given more affordable coverage due to the Affordable Care Act. Meanwhile the majority of Americans have to pay more to get the same coverage they had before the Affordable Care Act passed (thousands are still opting to pay the fine instead of paying for healthcare coverage in the first place). Besides the stupidity behind the Act, we have an outcome that most people beside liberal media would have guessed. The life expectancy of the average American has dropped for the first time in nearly twenty five years. Liberal media went into a panic saying there is no explanation for why this would be happening other than McDonalds selling the same large sodas they’ve been selling my whole lifetime. Meanwhile those who grew up learning that some people would travel to America for our quality healthcare already know exactly what is happening.

Another story the liberal media has yet to inform the masses on is how for the first time more people are dying in the America from Heroin than homicides committed with a firearm. Now this is something we have briefly heard, but what they will not tell you is why there is such an insane increase in Heroin related deaths. Liberals have repeatedly told us the war on drugs isn’t working, but under their president Heroin overdose has quadrupled its fatalities. I believe this may not be direct to any politics, but to the moral decline under his administration (also coupled with the lack of border security which allows Mexican Cartels to traffic drugs over here in the first place). Again it is the Democrats’ trying to raising the masses on government run programs while telling parents that education is not a family issue. Michelle Obama has spent her time trying to tell your kid what to eat, meanwhile their daughter is smoking pot and our nation has more people committing suicide and overdosing on illegal drugs than before her husband was in office. Maybe it’s time we stop telling people education is no place for religious virtues and healthcare is no place for capitalism, because it is obviously not helping Americans live longer.