I know this is late and so many people have talked about this already, but I’d like to share my perspective on how Donald Trump won the election. Liberal media was expecting his failure from the beginning, and I do believe that is why he won. However there’s more to it than that. Yes, without the media Trump never could have won. Hollywood in recent years has been completely open with the fact that they’ve been using media to influence the culture since the beginning. When accused of this in the past they would call us conspiracy theorists, but now political activists are claiming to take up show businesses for this exact purpose and vice versa. Bill Nye was a host for a science program most millennials grew up with. He doesn’t have any degree is science, yet now is coming out as a scientific expert to push evolution, climate change and abortion on the Democratic platform. People have grown tired of being told what to do, both by Washington and their Hollywood conspirators. However why did the country pick Trump? Couldn’t Ted Cruz, Rand Paul or even Ben Carson do the same?

My guess is not because of how Donald Trump acted, but how everyone received him. Jeb Bush was supported by the establishment Republicans (more of the same), Ted Cruz and Rand Paul were supported by the more politically minded, while Donald Trump was the underdog. Everyone else sounded better, had a better track record and was running to win over people who had previously voted in primary elections. On the other hand Trump was so chaotic and hated by the political field that average Americans saw something different. He got hate from left-wing and right-wing media, whether that’s bad or good, it’s something different. That’s where Donald Trump struck home. Not with the establishment or people who follow politics as tightly as myself. When I was listening to him I realized so many people could explain their views better, sound better and probably lead better, but that’s it. You could project yourself as at least some form of Donald Trump. Someone battling with media lies, who gets off track sometimes, who uses arguments found on social media and is frustrated with the current system. I never liked hearing him myself, but it’s a wake up call for everyone else.

On my side of things, the non-establishment politically minded people, we were left out in the rain. Ted Cruz had been the Tea Party candidate from the start and Donald Trump never met our standard. When Trump won the nomination we spread out across party lines. However even these people who weren’t particularly on the “Trump Train” did not want to be told who to vote for by entitled celebrities and let Hillary Clinton win. So while the establishment and media kept saying it was impossible, they never took into account what could happen on Election Day. Those people who were planning to vote 3rd Party waited till the last minute in hopes that their candidate would rise in the polls. When that didn’t happen they decided to go with the best choice at preventing another Clinton Presidency, which was Donald Trump. 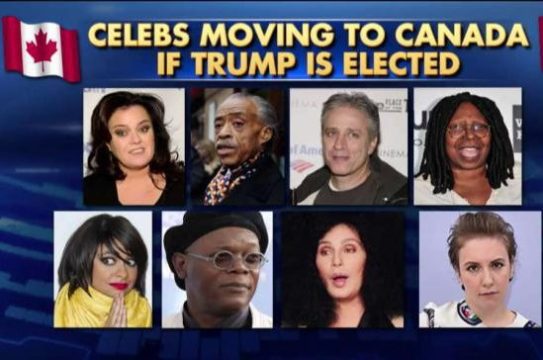 It was an odd election. To a degree there are many reasons why Donald Trump won. To offend the media, to disrupt business as usual, to defeat Hillary Clinton; none of it had an exact policy or form of dialog. When liberals have no other way to express their anger they burn their town down, conservatives on the other hand… their anger is repaid when it comes to voting. Currently media stationed in Las Angeles felt the whiplash of millions of Americans who do not agree with them. They thought they were on top of the world and they could talk down to us, but now that they failed they still don’t get it. You’re not our leaders, you never were. We never cared for your opinions and condemning us for daring to vote against you just makes this more rewarding. Pack you bags and head to Canada like you said you would, those of us who took the Pledge of Allegiance seriously wont miss you.

(Here’s a video I found that sums up how election night felt on the other side of the Television.)