Hopefully you didn’t click away when you saw the title of this article. If there was people who clicked away I’m quite confused. People have said they support Donald Trump for being “insulting and brash” yet if I insult Donald Trump and actually speak the politically-incorrect truth, I’m all of a sudden an “anti-republican” for attacking someone so “right-wing” as Trump. Listen up, I support the Constitution. That’s it, that’s my argument. I’ve always supported limited government, fiscal conservatism, traditional values and the entire Bill of Rights. Look back in my Twitter feed where last year I told a Muslim I’d rather defend her than a tyrannical hypocrite any day, and I still stand by that. To uphold freedom means everyone’s freedom, and my oath to stand by the Constitution of the United States of America will not be swayed by Republicans or Democrats telling me what is and isn’t conservative. If the Republican Party doesn’t stand by these principles I’ll leave, but that does not make me any less conservative. Donald Trump’s lack of moral justice and logic when it comes to paying for his foreign policy plans does not show me he’s even slightly interested in restoring constitutional law or cutting the national debt. If this is all about “telling it like it is” then please enlighten me on what you think that even means. According to Trump, Bill Clinton is apparently “one of the great abusers of the world”, and Ted Cruz is “probably the single biggest liar”. Last time I checked “telling it like it is” doesn’t mean “extremely bias exaggerations”. If Cruz is a bigger liar than Hillary, and Bill is an abuser up there with human traffickers, then can I call Trump one of the greatest adulterous, lying, politically Bi-Polar, greedy morons of our time? Is that “insulting” and politically incorrect enough for you? 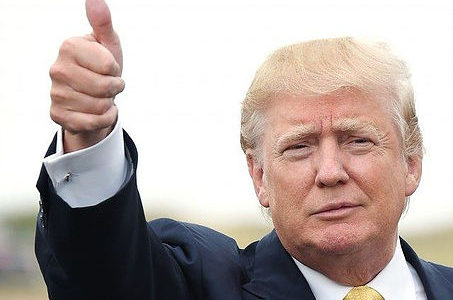 When I pre-registered for the Republican Party I thought we trusted in God, not a rich man’s self proclaimed authority that apparently makes him trustworthy enough to not only determine a candidate’s citizenship, but also makes him our go-to-guy for determining the trustworthiness of his political opponents. But of course if you call someone a liar and Fox News reports it every fricking hour, I guess people are going to start believing you huh? (Which not to get too far off track, but is Fox News committing suicide or something? Trump has shown nothing but anger towards the network and it’s respected commentators, yet they still talk about the guy more than any other presidential candidate. Maybe that’s something to keep in mind, Trump has constantly gone after Fox News and Republicans, but ignores the socialist gaining grounds in the polls). I was told that the people in this party looked ahead, wanted a fair tax code, supported religious freedom, and most importantly weren’t obedient little sheep like the Obaaaaaaama supporters. Well that theory’s dying isn’t it? As we are seeing so many so called “Conservative Republicans” bowing down like Trump’s already won. Why would you give up fighting one of the only candidates who does not look ahead at how his offensive remarks might hurt the party, does not support a flat tax, does not universally support religious freedom, and demands we simply go along with the unconstitutional commands of government agencies? So called “Conservative Republicans” are trying to tell you and me that this man, who has insulted and slandered actual Conservatives, is going to “inevitably” be our nominee. I promise you if that happens I’m leaving the party and I will not re-join until I’m under good suspicion that an idiotic time bomb like Trump will never be this highly supported under the Republican ticket. He truly is the right-wing Obama. Making promises that could only be answered by overstepping the Constitution, and when he loses Congress (due to his utter lack of honor and respect) he’ll resort to overstepping his executive authority to do whatever the hell he wants. My old friend said, “Trump won’t take shit and will start a war with North Korea if he has to.” One, that’s terrifying: Two, if we are to go to war with North Korea we’d have to do it pretty fast before Trump pisses so many people off that we lose control of the Senate. Even if 4 years of Trump would be beneficial, we’d then be slammed with the Democrat’s counter attack. It’s insanity to get into a fight over who can come up with the most authoritarian presidents in the history of the United States- so whatever the next 8 years brings us I’ll always be speaking out for our rights to life, liberty and the pursuit of happiness, no matter what the media or the brainwashed majority tells us to believe. We should not have to pick our poison between a greedy businessman and a greedy socialist.