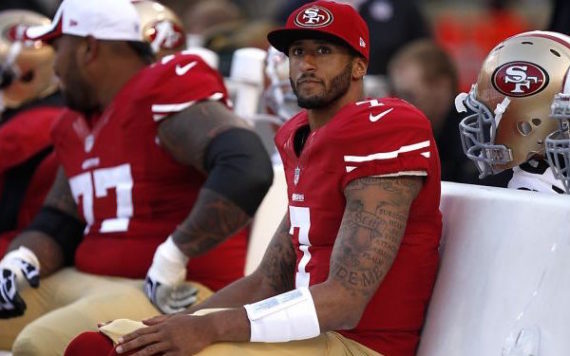 Recently we’ve seen some NFL players kneel and sit during our national anthem. For most Americans this is quite obviously wrong and shows just how fallen and divided we’ve gotten as a country over the past several years. However this article isn’t going to be about bashing these players or politicians who accept this, I’d like to explain why this is wrong. Since some people defend these forms of protests and the players themselves seem quite ignorant to what they’re doing, I’d like to simply share some very general information to those unaware due to our criminally uneducational school system and news media.

First of all this all started with Colin Kaepernick sitting during the national anthem at a pre-season game. Although I disagree with the logic behind his protesting and his obvious disrespect for police (he was later seen wearing socks depicting pigs dressed as police officers) that isn’t what this article is about. This isn’t a Black Lives Matter v.s. All Lives Matter debate, it’s about the American flag. The flag represents everything about this great nation, its people, form of government and liberty. If the government starts overstepping its authority or justice is denied, that does not change the meaning of that flag. That is why anyone from Martin Luther King Jr. to the resistance at Bundy Ranch flew the American flag. Yes they were against what the government had been doing, but they were not against the principles that make us Americans. What confuses me is Colin Kaepernick does not sound very anti-American, simply confused on what he’s doing (which goes for most of the peaceful sect of the Black Lives Matter activists). Colin has said, “When there’s significant change and I feel like that flag represents what it’s supposed to represent in this country, I’ll stand…” Well then I don’t think you quite understand what you’re doing. Sitting out during the Star-Spangled Banner is not a sign of protest against injustice, it’s a sign of protest against the Star-Spangled Banner, the same flag that represents your rights. You should be holding up this flag in protest against whatever corruption or injustices you think is ongoing, sitting out simply says that you don’t care about the justice that flag stands for (including justice against tyrannical authority). Sitting during a national anthem is not peaceful protest, it’s disrespect. Even Americans stand for the Canadian national anthem as a sign of respect- you are not endorsing every institution in a country by simply not showing disrespect towards their anthem and/or flag.

What I’d like to question every NFL player trying to protest police brutality while simultaneously protesting our flag, could you not find a better way to help your cause? Y’all make millions and have thousands sometimes millions of fans, could you not use that strength to help get families out of ghettos? With your power I would expect you to be able to bring awareness to the issues in a more respectable way than just marching out there and disrespecting the flag that so many men and women have died for. If you want to be an American but think the country “no longer represents what it’s suppose to represent” then hide a flag in your helmet, walk out there and when the anthem plays pull it out and hold it upside down. This is a symbol of a nation in distress. Or if you think that doesn’t let people know what you think is going down in this country make a sign, rent a billboard on a major road leading to your home games. You make millions by rushing head first into competition, show that bravery in politics by being a leader instead of sitting down like a coward. This is coming from someone who disagrees with the Black Live Matter movement, but what I really would just like to see is Americans respecting each other again. Protest like you’re actually trying to fix a problem, not like you want to overthrow America.

Your right to sit is represented in the flag you’re refusing to stand for.