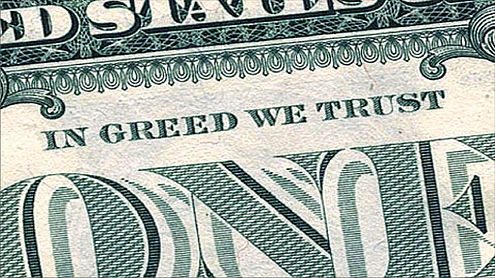 Capitalism collapses when people are greedy and unwilling to voluntarily help each other. The other option is forcing people to help each other, which gives powerful leaders the chance to exercise their greed at the expense of every citizen. This is what capitalism verses socialism is. You can either put your faith in people and lift each other up, or entrust powerful leaders with your family’s life and freedom.

So if greed kills capitalism, the worst person to lead a capitalist society is a self proclaimed greedy person who admits to playing the system. Greedy people, in politics or not, run capitalism into the ground. What happens then? Socialists rise up. With socialism you then lack freedom and are at the mercy of the federal government. In the end when the wealthy have been thoroughly smothered, the government has no way to survive other than feeding off generous capitalist societies or forcing people into work in order to export to capitalist societies.

Keep this in mind when it comes time to vote. Donald Trump might be good at offending people and being “greedy for America”, but those offended people will most likely take control of Congress and elect the biggest socialist this country has seen once Trump’s done pissing everyone off.  As for Bernie Sanders, if you enjoy freedom and want to restore the American Dream, I’m pretty sure you already understand his problem. Our country has been on this path since the late 1920s, but our current decision could very well be what pushes us over the edge.

Here’s a few verses from “Two” Corinthians as Trump calls it:

9:6-9 Remember this: Whoever sows sparingly will also reap sparingly, and whoever sows generously will also reap generously. Each of you should give what you have decided in your heart to give, not reluctantly or under compulsion, for God loves a cheerful giver. And God is able to bless you abundantly, so that in all things at all times, having all that you need, you will abound in every good work. As it is written: “They have freely scattered their gifts to the poor; their righteousness endures forever.”