(Brace yourself, this weeks article has a lot to it).

Several weeks ago I sent a letter to the editor of Tampa Bay Newspapers explaining some of the history and meaning behind Confederate statues and Robert E. Lee. I am very grateful they published the article, but just so people are aware my original title was “Confederate Statues are More Than a History Lesson.” For one reason or another the editor published my article with the title “Confederate statues deserve to stay” which I think sounds a bit more aggressive than what I was going for. The following week it seems that a man named Bob Lasher wrote a rebuttal to my letter in his own letter to the editor. I didn’t really want to talk more about the Civil War at this point since I’ve already covered the Confederacy much more than the average political commentator. However when something I’ve written has been specifically covered I feel like I need to address it. Before continuing with this article you probably should read my previous blog post, and Mr. Lasher’s article. Here’s a link to his article on TBN Weekly: http://www.tbnweekly.com/editorial/readers_poll/content_articles/091317_pol-01.txt

From what I can gather, Bob Lasher argued that Confederate soldiers had committed treason by levying war against the United States (as our Constitution defines as treason). One of his reasons for removing Confederate Veteran statues was that countries don’t have statues of traitors; such as Great Britain not having statues of George Washington. However, was Washington not right? If there was a statue of Washington in England would you support its removal? Also both the Confederacy and the Union still had “of America” in their name. These people were all Americans, called to arms by their states, henths why America would have statues honoring them. Mr. Lasher further argued it doesn’t matter what Confederates did before or after the war, which I consider a jab at my remarks on Robert E. Lee pledging allegiance to the U.S. Constitution after the war. Which in a debate about morals, I believe the repentant person who brought the war to an end is still deserving of celebration (such as the story of the Prodigal Son, where the son’s return home was what mattered most). After saying all that I’m happy to see these arguments brought up, since the core debate of the Civil War should be over secession and treason. This is more of the in-depth debate that should be going on, opposed to just yelling “racist” at each other.

Sadly Mr. Lasher did not stick to an argument against secession through his entire letter. Instead he based it solely on the idea that the war was perpetrated by the Confederacy, and it was in order to preserve slavery. There is no greater example against this than the state of Virginia where many famous Confederate Generals (such as Robert E. Lee, which he dismisses as a traitor) came from. The war neither began or ended for slavery, it started because Abraham Lincoln refused to allow states to secede. Virginia had previously voted against secession, but only seceded after Lincoln called on them to aid in invading the south. All the south wanted was independence, and if Lincoln hadn’t chosen to settle the matter by force, less states would have seceded and there would have been no war. We can love either side of the war for many different reasons, but to say the Union was completely right, at some point you have to agree that a state’s secession is an act of treason punishable by war. Then you have to decide for yourself what made the Confederacy’s independence from the Union wrong, and the United States’ independence from Britain right. Constitutionally, states are not aloud to join confederations, which makes the act of secession very debatable. For now let’s say the United States has the legal ability to return states by force, but didn’t Britain have the same legal authority over the American colonies?

This isn’t a personal attack on Mr. Lasher and I believe he wrote a good article on some good points. However I would like to set the record straight. Treason is levying war against the United States, and since the United States never recognized the Confederate States as a country, Abraham Lincoln was essentially fighting a war against his own country. Unless, of course, we stop referring to the Civil War as a war. Everyone who calls this a war is essentially siding with the Confederacy, because the United States never declared war. When Robert E. Lee surrendered, his men were allowed to return home as part of the agreement. If these soldiers are suppose to be “treated as traitors” in this country, then why did the north allow them to return to their homes? And as for Mr. Lasher’s random stereotyping of the Republican Party, I joined a third party because of my concern for our Constitution. I hope you have done the same considering the Democratic Party’s last nominee admitted her Supreme Court pick would not defend the Constitution as it is written. 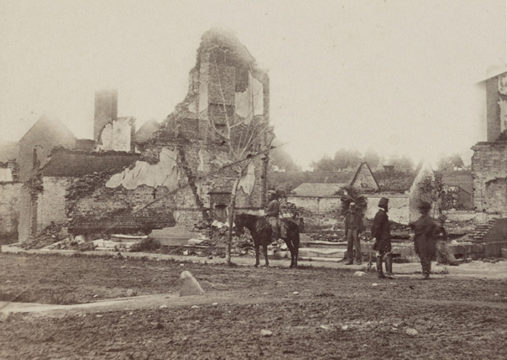 The Civil War was a mess for this country, and I believe both sides were acting out of their constitutional boundaries. However would we act the same if this situation happened today? If California seceded, would Donald Trump be praised for calling up 75,000 men to take back the state? Would the media praise him as he outlaws negative press, suspends Habeas Corpus and burns down Las Angeles? Although it would make many hypocrites I still believe the majority of this country would oppose such a reaction. North or south, Democrat or Republican, we live in a country built by men and women who believed the people are the ultimate authority. Whenever the federal government says we can’t do something rebellion is in our nature. That is why even today we have these debates over the Civil War, because the argument isn’t so black and white. You can speak of war crimes all you’d like, but that isn’t a one sided argument either. Northern POW camps were NOT much better and were often worse (not to justify what happened in Andersonville). Not to mention the amount of cities burned during the Civil War. Each side had their goods and bads. Soon I fear we won’t be able to enjoy any part of our origins because of our own self-righteousness. Currently we’re involved in 7 undeclared wars and using federal courts to make political gains. Condemning dead soldiers who had no control over their state’s secession isn’t going to get this country anywhere.

This article was originally going to end here, however just today I saw that someone had already written a response to Bob Lasher’s article. He argued that secession is not just a right, but these terms were established when the Constitution was being ratified. You can read Roger Young’s article here: http://www.tbnweekly.com/editorial/readers_poll/content_articles/091917_pol-02.txt